When you design a seagoing warship, especially a WWI/WWII battleship, you pretty much have to start off with the general arrangement of big chunks of machinery. Main and secondary armament with their associated shell rooms and magazines demand large unbroken slices of real estate, as do the propulsion units. Together, these largely dictate the overall profile of the ship.

With a traditional ship, you are always working within the constraints of a hull, along with rules of buoyancy and center of gravity.

When it comes to a spaceship, two obvious differences spring to mind immediately.

First, you can abandon the need for streamlining. Depending on how things work in your story world you may have other unique constraints to think about, but spacecraft generally don’t have a dense medium like water to plow through, or depend on aerodynamics for lift. So you can think beyond the ship’s hull or aircraft’s fuselage and go for different shapes - blocky and angular, spindly and fragile - and you essentially have complete freedom over basic body plan. Who else remembers the shock of the first appearance of the starship Enterprise, making a break from sleek Buck Rogers-style rocket ships?

To me, that freedom actually makes it all the more important to start off with some overall concept to work within, otherwise you risk ending up with a mess (unless, of course, a disordered mess is what you actually want)

Second, a seagoing warship is typically designed to afford its main armament as broad an arc of fire as possible. With superimposed turrets fore and aft, the entire main armament can usually be brought to bear on a target broadside on (and for maybe 15 degrees either side of perpendicular.) 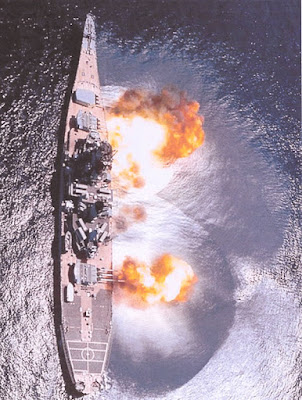 Outside of that arc, you can bring no more than half your guns to bear, either the forward or aft batteries. But you only have to think about coverage over a two-dimensional surface. In space, this problem extends to three dimensions, posing new challenges and compromises.

In the case of my Imperial Swords, I chose to compromise. The ships are designed to attack ground targets, to terrorize rebelling planets into submission, so the primary weapon doesn’t need a broad arc of fire.

With almost leisurely movements, Hammer rolled away from George Leonard. With a sick feeling in her gut Shayla knew this was no act of submission. The Sword’s primary weapon, her city-wrecking plasma cannon, occupied the full two-thousand-foot height of the battleship from the bulbous upper pod containing hangars and the main battle platform down through the height of the hull to project from her underbelly. She was taking up an attack posture, lining up a kill shot.

Their secondary armament forms a ring around a broad pod spreading above the main hull. This gives almost complete field of view, but there are gaps ...

Icy fury flooded Shayla. She blinked her eyes clear and brought herself even closer in. From past experience she knew these ships had many blind spots up close, the most extensive being right on top of that upper pod.
Hammer maneuvered away. Her captain was also aware of those blind spots and determined to bring his weapons to bear.

Unlike the ground-assault Swords, battleship Admiral George Leonard is intended for general ship-to-ship combat so all-round cover is vital.

I started with an image in mind of a fairly slender body, with paired pods of weapons down either side. The pods jut out from the sides and give relatively clear all-round cover, with roughly half the main weapons able to target any given point of space. The feel I was going for was of a narrow and cramped interior surrounded by machinery. As it happens, some of that thinking went by the wayside as I’ll explain in a later post, but this gave me the conceptual framework to build from. What you can see here is a plan view of the frame.

The weapons are mounted in separate modules that dock in the bays on either side.

Once aboard, the going should be easier. Enforcer-class ships were huge, second only to Imperial Swords, and the mainstay of the Firenzi navy for the last five millennia. A bulky hull contained machinery and accommodation, but farsighted architects had designed them with pairs of vast docking points to mount weapons or more specialized payloads. This flexibility, and the ability to upgrade weapon systems over the years without a massive overhaul, was the secret of the ancient ships’ longevity.
If Admiral George Leonard was typical of her class, she’d be packing six batteries of beam weapons at those docking points. Shayla hoped to identify the source of the blinding shot that had vaporized the scout. From her stint aboard a similar ship, she had the glimmer of a plan to avoid arousing suspicion.

The main engineering spaces lie between the pairs of docking points, with main crew accommodation forward, and hangars aft.

More of that in future posts ...