Six Sentence Sunday is a weekly blog hop where participants post six sentences of their writing. You can find out more about it by clicking on the image, but hurry, it is only running until the end of January.

I am posting from my current WIP, Tiamat's Nest. In previous posts last month, I introduced Charles and his computer simulation. Here, a second strand of the story is unwinding. Three online gamers, Tin Man, Pink Marie, and Moonshadow, have had their immersive avatars captured by the mysterious Samurai.

Tin Man faced not the half-expected, unimaginable nightmares, but the expressionless mask of a Samurai warrior.

"What?" In speaking, Tin Man found that his avatar was once more under his control. He looked around, recognizing the cavernous, rain-spattered glass vaults.

The Samurai seemed unfazed by the inane utterance. "Seems I need to set better fences," he muttered.

The innocence of animals

It takes the innocence of animals to restore some measure of sanity amongst the human-inflicted madness that has dominated life recently.

Earlier in the week, we added a 10-week-old kitten to the menagerie. Ever since the kids arrived on the scene, we have always adopted adult cats, but this year we agreed that next time would be a kitten again.

So meet Lucy. I like cats in general, but I do have a soft spot for kittens! 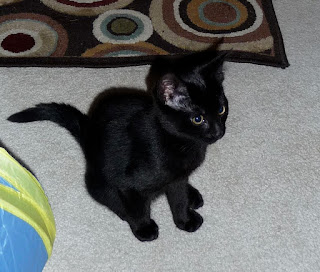 Today we took a drive out to the Wild Arc animal sanctuary with a bird we'd rescued from the cats. Well, actually I think Gypsy rescued it. I heard a scrabbling noise and went to investigate, to find Gypsy climbing the stairs with this bird in her mouth. She dropped it, and it fluttered across the living room floor, where Megan trapped it and kept it safe. It appeared unharmed apart from losing some tail feathers, but it couldn't fly.

It's hard to be certain, but I honestly think Gypsy was carrying it and trying not to harm it. She could have swallowed it in one gulp if she'd wanted to. I also suspect it was brought into the house by one of our old ladies planning to teach the new kitten how to hunt.

On our way back from Wild Arc, we stopped off at Witty's Lagoon to give Gypsy a walk. On the drive, we saw eagles and deer. To top it off, in the sea quite near shore we watched an otter diving for food. This is the first time I've ever had a clear sight of an otter in the wild, and it made my day.
Posted by Botanist at 5:22 PM 13 comments:

Sorry The Bald Patch has been unusually quiet lately, but I haven't been in the mood for posting. It's not been the best month.

Three weeks ago today, a close friend of the family died suddenly. He will be greatly missed by all of us.

Ali agreed to take on his dog, a husky called Toby. We've looked after Toby many times before and always been careful to keep him separated from the cats, but never had a problem. The following Monday, Tubbs failed to come in for dinner. We were worried but could do nothing about it. The following morning, we found him dead in the back yard. Toby had caught him.

Last Monday, both the kids were ill, but recovered well and life seemed to be getting back to normal. Then on Friday we read about the tragedy in Connecticut. This news hit unusually hard. I just keep imagining a whole class from our own elementary school torn away, and I feel cold inside.

Today, while taking some special needs kids from her school out for a treat, Ali had her purse stolen. Happy Christmas, whoever you are.

This evening, the world just feels surreal. I know it's irrational, but it feels like the overtures of a bigger storm to come. Our hold on life and civilization feels especially fragile and vulnerable right now.

Sorry again. I don't mean to write a gloomy post. I'm looking for reasons to be cheerful, and open to suggestions...
Posted by Botanist at 10:30 PM 10 comments:

Email ThisBlogThis!Share to TwitterShare to FacebookShare to Pinterest
Labels: Life. Don't talk to me about life

Out of sight, out of mind?

Since I posted progress on Tiamat's Nest last month, I've added another 7,500 words, a bit short of my target of 10k a month. I find I'm still struggling with that "What happens next?" question.

Things seemed to be going along fairly well for most of November. Then I hit a brick wall, and belatedly realized that I'm also grappling once more with an earlier demon from August - tangled timelines and parallel plot threads.

This demon got cunning, though, and ambushed me from behind. I didn't spot him until it was too late, because all my parallel threads are happening off stage and I didn't even realize they were there!

The thing is, when you write with just one or two POV characters, the story revolves around what those characters experience. It's easy to forget about all those others who've vanished off stage for a while.

All your characters, even the minor ones, have lives of their own to lead. When they disappear from the page, it's tempting to shelve them, ready to bring them back into the story when they're next needed.

That might work if their lives off stage genuinely don't intersect with the story. While Harry, Ron, and Hermione carried on with their adventures, I'm sure Snape didn't spend the whole time perched on a stool in his dungeon until he was needed. He must have had other things to do, but we don't know about them because they weren't relevant. Fine, but as a writer, how do you know unless you've given it some thought?

When Frodo and Sam escaped from the Shire and arrived at The Prancing Pony, Gandalf was nowhere to be seen. Was he sitting in a leafy glade, smoking his pipe, and waiting for his cue to turn up at Rivendell? Was he heck! He was having his own adventure with Saruman, but we only get to hear about that later on because the story is not told from his point of view.

In my case, I started off with multiple participants and had to use various tricks to untangle the various storylines. I settled on just two POV characters, but I was still very much aware of the other threads to be woven together.

The point I've reached in the story, both my POV characters are now together (which is posing challenges of its own) and I was merrily pootling along telling their story. I started running out of steam, feeling like I was missing something important, and it finally clicked - those other non-POV individuals are still out there, and they are important to the story! They need to be doing things to help, and I've been neglecting them.

I hope they'll forgive me, and choose to co-operate!

The lesson is that all your characters have their own story to tell. It may be relevant, it may not, but even so it might help enrich the story you're telling. So, it's worth asking yourself, for each of your off-stage characters, what might X be doing now, and is it important to the story?
Posted by Botanist at 6:13 PM 20 comments: