The pandemic is still with us, obviously. March seems like a long time ago, let alone the blissful ignorance of January when it all sounded like a distant problem being faced by people half-way around the world.

Back then, it felt like the world was being turned on its head by the evolving spread of the disease, and the ever-changing advice as new facts emerged. Precautions appeared at first unthinkable, then laughable, then became incorporated into everyday life.

Now we are settled in for the long haul. Who knows when a vaccine will be available, or how effective it will be? Meanwhile, the world has to keep turning and we continue living our lives as best we can. Masks, distancing, and other changes in how we live and work have become an accepted part of life.

But, underlying all the more obvious disruptions and anxieties, I've noticed a more subtle source of stress. It's not something I've heard people talk about, because most people I know work from home most of the time, and this stress is most noticeable in the office.

Social distancing means deliberately and consciously keeping your distance from other people. That requires constant awareness, and active avoidance behaviors. That is not normal behavior for a social animal. In fact, it goes fundamentally against our very nature.

Intellectually, I understand the reasoning. Heck, I'm doing exactly the same to my co-workers – keeping distance, backing off if I see someone coming the other way in a narrow hallway. But on the receiving end, it feels like being shunned, rejected, cast out from society.

Casting people out is a harsh and cruel punishment practiced by societies since time immemorial. It hurts.

Of course, this isn't punishment, it's precaution. But knowing that there's a good reason, that it's not about you, doesn't lessen the hurt. When intellect conflicts with gut feeling, intellect loses. I don't know what the answer is here, but it doesn't feel like something I can just “deal with” or get used to.

Email ThisBlogThis!Share to TwitterShare to FacebookShare to Pinterest
Labels: COVID-19, Life in general

This snippet concludes the opening chapter from The Long Dark. Anna drives a massive surface vehicle and is aiming to retrieve a hard-to-reach navigation beacon before winter closes in. A sudden sound startles her. The last snippet ended: Home and safety, a crawler driver always looked to their rig first when danger threatened.

A faded echo rolled over her like distant thunder. Anna scanned the horizon. Her scalp crawled. There’d been no signs of a storm, and the landscape around her seemed placid, unmoving. Besides, that didn’t sound like it came from the depths. She squinted skywards.

A vapor trail traced a fast-moving line across the coppery sky and cast an ethereal shadow on the skim of cirrus that muted Big Red’s shine. Anna puzzled for a moment, and released a pent-up breath. Dangerous time of year for craft to be chancing a landing.

She sighed and shrugged, not her problem, and turned her attention back to securing the beacon.

Hopefully this ties together Anna's scenes with Jennifer's.

After three months' sporadic work, cover art is now down to finishing touches. 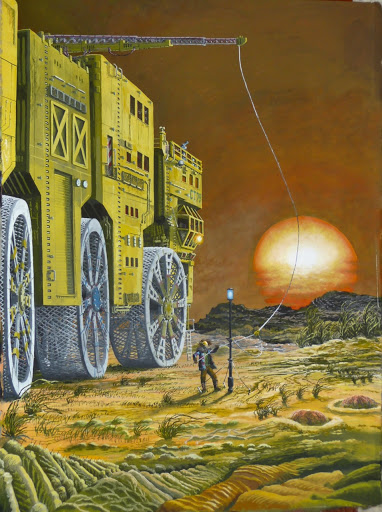 Continuing the opening from The Long Dark in Anna's point of view. Anna is driving a massive surface vehicle and is aiming to retrieve a hard-to-reach navigation beacon before winter closes in.

Up another hanging ladder, Anna mounted a slender catwalk suspended below the front of the cab. She selected a lightweight cable from the row of drums above her head and released the drum’s clutch.

Once more on the ground, she fastened the dollies a few meters back from the end of the cable, then clipped herself on for safety. With the end of the line slung over one shoulder, and a sounding pole in her free hand, she tested the surface ahead as she trudged away, sinking ankle-deep with each step.

Despite the late season wind keening around her, sweat slicked the edge of her mask by the time Anna slogged her way to the beacon.

She slackened off the beacon’s guy lines and carefully lowered the heavy three-meter pole to the ground, slipping the axle of a dolly beneath each end.

A sharp crack followed by a muted rumble startled her. She glanced instinctively back to the crawler, calming her heartbeat when she reassured herself it was okay. Bright yellow boxes slung between silvery mesh wheels looked like a row of old-fashioned stagecoaches, except those ancient carriages were never built four decks tall. Home and safety, a crawler driver always looked to their rig first when danger threatened.

Back to cover art, and progress at last. That last unit and wheel peeping in from the edge of the page is done. From now on, progress will be less obvious as it's down to details. 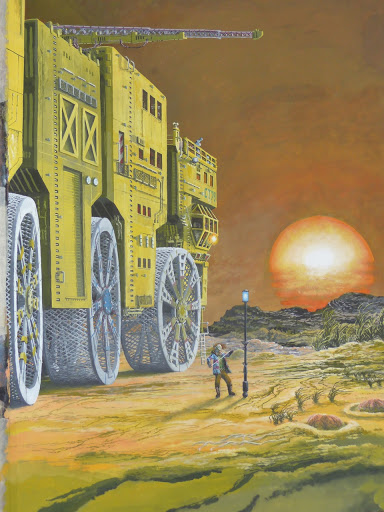 Continuing the opening from The Long Dark. Although it's been drawn out in time by the weekly snippets, the chapter as a whole is quite short. To conclude the chapter, we switch back to Anna's point of view. Anna is driving a massive surface vehicle and is aiming to retrieve a hard-to-reach navigation beacon before winter closes in.

Unhurried, Anna reviewed the crawler’s controls, checking the giant vehicle was safely immobilized. She grabbed her mask from a hook on the back of her seat, and pulled it over her head as she descended a narrow stairway to the cramped equipment bay beneath the drive deck. She paused to settle the mask properly in place and pull a strand of hair out from under the edge seal, then she hauled a pair of two-wheeled dollies and a tool belt from the neatly-stacked storage racks.

Through the crawler cab’s lower airlock, Anna climbed a ladder to the ground. Hints of over-ripe fruit in the air reminded her that the mask’s filters would need cleaning when she reached home. Her unfastened jacket flapped around her thighs in fitful squalls. She ignored an icy chill working its way around her waist through gaps in her clothing, and lowered the dollies to the ground.

She knelt and pulled off a glove to test the plant’s surface. Tight-knit matting and whorls of stringy fibers yielded to her touch. They felt dry, scratchy, but still held firm when she tugged on a handful.

Seasonal changes were coming on fast, but maybe she’d arrived in time in this case. She suppressed a shiver of unease as she peered at the ground between her and the beacon. She had a job to do.

That big heap of firewood you saw last week is almost all gone, but it's been unusually hard work this year. Some years we get lucky, and most of it is the right size for our stove. It just needs to be barrowed around to the carport and stacked neatly ready for the winter.

This year, probably around 80% of it was in chunks that needed splitting down a bit. To make things harder, this load is mostly maple and is very dense. Some pieces split easily, but some put up a fight. And there's a small-ish pile left that we couldn't touch with the axe, so today we're renting a log splitter for the day to tackle those last bits.

Weekend Writing Warriors is a weekly blog hop where participants post eight to ten sentences of their writing. You can find out more about it by clicking on the image.
Continuing the opening from The Long Dark, on the way down to Elysium with her senior negotiating team, Jennifer receives an unwelcome message. The previous post ended with: “The merest whiff of it beyond this circle, and we all spend the rest of our lives in jail.”
=====
Jennifer pondered while the cabin windows shone with the plasma glow of their hypersonic passage across the sky. A faint tang of burnt flint hung in the air. “Are we to know the nature of this potential discovery?”
“The President chose not to commit that detail in writing.” Galloway sniffed. “Just enough information to convince you of the gravity of this order.”
Jennifer narrowed her eyes at him.
Galloway smirked. “Your job is to make sure the Company will have complete control of this discovery when it finally breaks. The colonists get nothing.”
=====
I've had a new distraction this week – our order of firewood for the winter arrived, which was a weight off our minds because it's been hard this year to track down a supplier. Now this all needs to be split down to more manageable sizes and stacked ready in the carport. 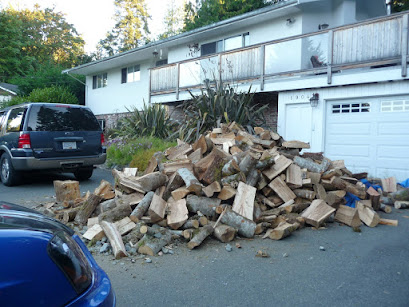 All the same, I have made progress on the cover art, just not quite as much as I'd planned. 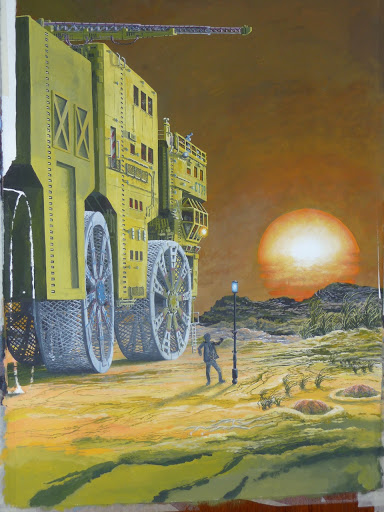