Continuing a scene from The Long Dark in Mikey’s point of view. Mikey is trying to make sense of the adults’ conversation over dinner.

Memories crept cautiously to the fore, memories of pain and panic that he’d kept safely tucked away since he was young. It was happening again. Anna hadn’t come home last night. That wasn’t unusual, except that she was supposed to be here. Instead, Georgina had brought him home and looked after him. Georgina, not Karin. Too much happening that shouldn’t be happening.

Last night, long after lights out, Mikel had crept into the family room and spent hours on a tablet trawling the town library, trying to make sense of what was going on. Something in conversations around him had given him a starting point.

More excerpts from The Long Dark. You met Anna and Jennifer in earlier posts, now I’m introducing the third major point of view in the story – Mikey, Anna’s son. This scene happens after Anna rescues the crew of a stranded crawler, though they sadly lose one of the crew members ...

Mikel arranged a meticulous wall of crisp fries, corralling a spoonful of mushroom stew. A small heap of green salad stood guard to one side. The trick was to eat the innermost fries before they got too soggy, and rearrange the circle before the stew leaked out onto the rest of the plate. Mushroom stew and green salad didn’t mix. Mikel couldn’t explain why, it was just one of those unhappy combinations that he avoided at all costs.

Like the school room, the clan dining room was unusually quiet. The adults’ voices were odd today. They talked in hushed tones about someone called Ambrose. Something bad happened. When he looked close, there was a trail of damp down Anna’s cheek and a strange catch in her voice.

He tried to ignore it. Wishing it away. Anna was crying. The strangeness stabbed deep into his mind. Children cried. Anna didn’t. Anna was strong. It would be okay.

Mikel had no idea who Ambrose was. Maybe he’d met him, maybe he hadn’t. Grown ups all looked the same, apart from a few that he knew well, so the talk was not relevant. Not interesting.

Following Teresa's idea last month, I'm having a go at posting the draft blurb for The Long Dark. This has been through a couple of rounds of comments with a group of critiquers, but I'm keen to give it a try with a different audience:

Trapped in the lengthening nights of Elysium. Abandoned by the last convoy south. Alone with her son and his teacher.

Anna never thought she would die this way.

She won't let it come to that. She scours the darkened town for anything to help them make the long trek to rejoin their clan. But on a world starved of engineering resources it will take all her ingenuity to rig up a usable vehicle.

With a chance of escape almost in reach, they find they are not as alone as they thought. Hopes of rescue are crushed when they realize the unexpected visitors are on a mission that they will kill to keep secret. Whatever these off-world intruders want, it can't be good for Anna's world, and a fight for personal survival becomes a battle for the future of the entire colony.

While working through final edits, I've also started posting background material to my website. Click on the image to find out more.

And cover art is nearly complete. Since last month I've mostly been playing around with the look of the sun. That was one element I wasn't happy with, and I think it's heading the right way now. 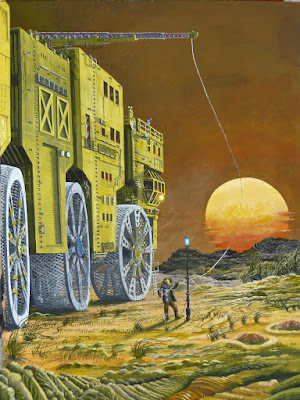 At this time last year, my target was to publish The Long Dark about now. I was coming to the end of a detailed critique cycle and I figured it would take a few months to process the feedback, revise, and complete all the finishing touches for publication.

It ended up not being quite as straightforward as I'd imagined. There were some common comments on a few areas, and I went out to a couple more beta readers after a serious round of edits to see if I was getting close. Now I'm working through those story lines again on what I think will be my final round of edits before detailed proof-reading.

While the story was out with beta readers, I've been working on cover art. Again, this has ended up taking longer than I'd originally intended. You can see regular progress posted her all the way back to May.

One part of the artwork was bugging me, though. The sun wasn't right. It's meant to be a red giant, which will be huge in the sky but nowhere near as bright as our sun. I started off emphasizing the redness, but I've never been really happy with it and never figured out why. 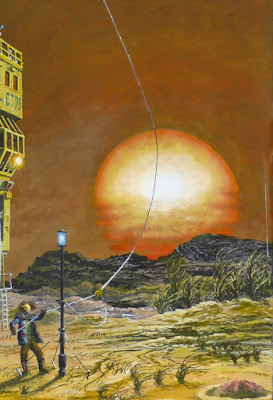 Then – a silver lining to all the smoke in the sky the last two weeks – I was looking up at the sun on my way into work and realized I've been trying to show Big Red as a sphere. I decided that was a mistake, and the disc would likely appear a lot flatter, like our sun at sunset or through a smoke haze.

I'm not quite there yet, but getting close. 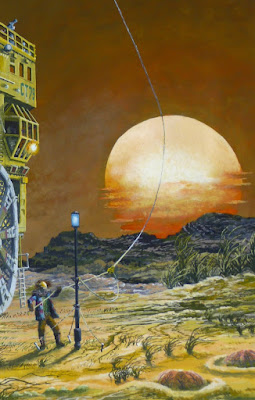 All told, I do feel like I'm now in the final stretch, and still aiming to publish before the end of the year.

Email ThisBlogThis!Share to TwitterShare to FacebookShare to Pinterest
Labels: The Long Dark, Writing

On top of all the 2020 craziness, the west coast is ravaged by wildfires.

Obviously I'd seen the reports from California, but hadn't realized how close to home the trouble extended. Until Tuesday morning, when we woke up to smoke-filled air drifting from across the border.

Air quality here has been poor all week. Here is the view from my deck this morning. You can see the haze obscuring nearby trees, and the row in the distance – only half a mile away – is almost invisible. 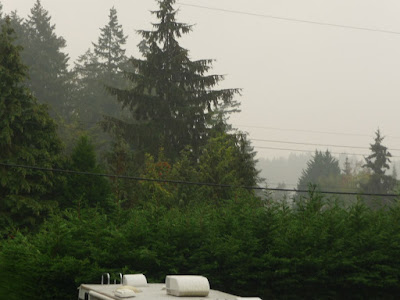 Fires extend all the way through California, Oregon, and Washington state.

Ironically, it was only a week ago that Ali and I were commenting how lucky BC has been this summer. When we went on vacation, campfires were still allowed at the end of August, something we've never seen in all the years we've been here. After several record-breaking years of wildfires, this summer has been damp and cool, so we haven't had to deal with mass evacuations on top of the pandemic.

Not so down south!

Wherever you are, I hope you're keeping safe this crazy year.

So, we're now into September. Since moving to BC, I've always reckoned on Labour Day marking the end of summer. Yes, we may still get warm spells for a few weeks yet, but as soon as the sun disappears it feels autumnal. Darker mornings and evenings, cooler air.

In the last week, Ali and I took another trip up-Island. We enjoyed our week in a cabin back in July, and decided to do it again to round off the summer. It was just the two of us this time (plus dogs) which made a nice change. The week started off a bit crappy, with a two-hour hold-up on the highway due to a serious accident earlier on in the day, followed by a day of rain, but things improved throughout the week. Overall, we had a good time doing nothing much in particular.

Now it's a long weekend before we all get back to the grindstone.

There is a lot of confusion and anxiety about the upcoming school year.

At Ali's school there is supposed to be distancing and other health measures in place, including some remote learning. But from the information available, it looks like all students will be on site for a large chunk of the time which seems to make a mockery of the need for remote learning. If on-site is good enough for half the day, why not the whole day? And the class sizes are too large to allow effective separation.

Matthew will resume college studies, and it looks like most of the learning will be remote other than essential lab work. Again, questions of practicality rear their heads if an on-campus block is followed by remote work where the students are supposed to be off site.

Maybe things will become clear in the coming week, or maybe it will be a gong show. Who knows?

Email ThisBlogThis!Share to TwitterShare to FacebookShare to Pinterest
Labels: COVID-19, Life in general

The pandemic is still with us, obviously. March seems like a long time ago, let alone the blissful ignorance of January when it all sounded like a distant problem being faced by people half-way around the world.

Back then, it felt like the world was being turned on its head by the evolving spread of the disease, and the ever-changing advice as new facts emerged. Precautions appeared at first unthinkable, then laughable, then became incorporated into everyday life.

Now we are settled in for the long haul. Who knows when a vaccine will be available, or how effective it will be? Meanwhile, the world has to keep turning and we continue living our lives as best we can. Masks, distancing, and other changes in how we live and work have become an accepted part of life.

But, underlying all the more obvious disruptions and anxieties, I've noticed a more subtle source of stress. It's not something I've heard people talk about, because most people I know work from home most of the time, and this stress is most noticeable in the office.

Social distancing means deliberately and consciously keeping your distance from other people. That requires constant awareness, and active avoidance behaviors. That is not normal behavior for a social animal. In fact, it goes fundamentally against our very nature.

Intellectually, I understand the reasoning. Heck, I'm doing exactly the same to my co-workers – keeping distance, backing off if I see someone coming the other way in a narrow hallway. But on the receiving end, it feels like being shunned, rejected, cast out from society.

Casting people out is a harsh and cruel punishment practiced by societies since time immemorial. It hurts.

Of course, this isn't punishment, it's precaution. But knowing that there's a good reason, that it's not about you, doesn't lessen the hurt. When intellect conflicts with gut feeling, intellect loses. I don't know what the answer is here, but it doesn't feel like something I can just “deal with” or get used to.