When a dog lies on its back, it's a submissive pose. A dog is highly vulnerable in that position.

So for a dog to sleep on its back, it must be supremely comfortable with its surroundings.

Say "Hello" to Gypsy, the most relaxed pooch on the block... 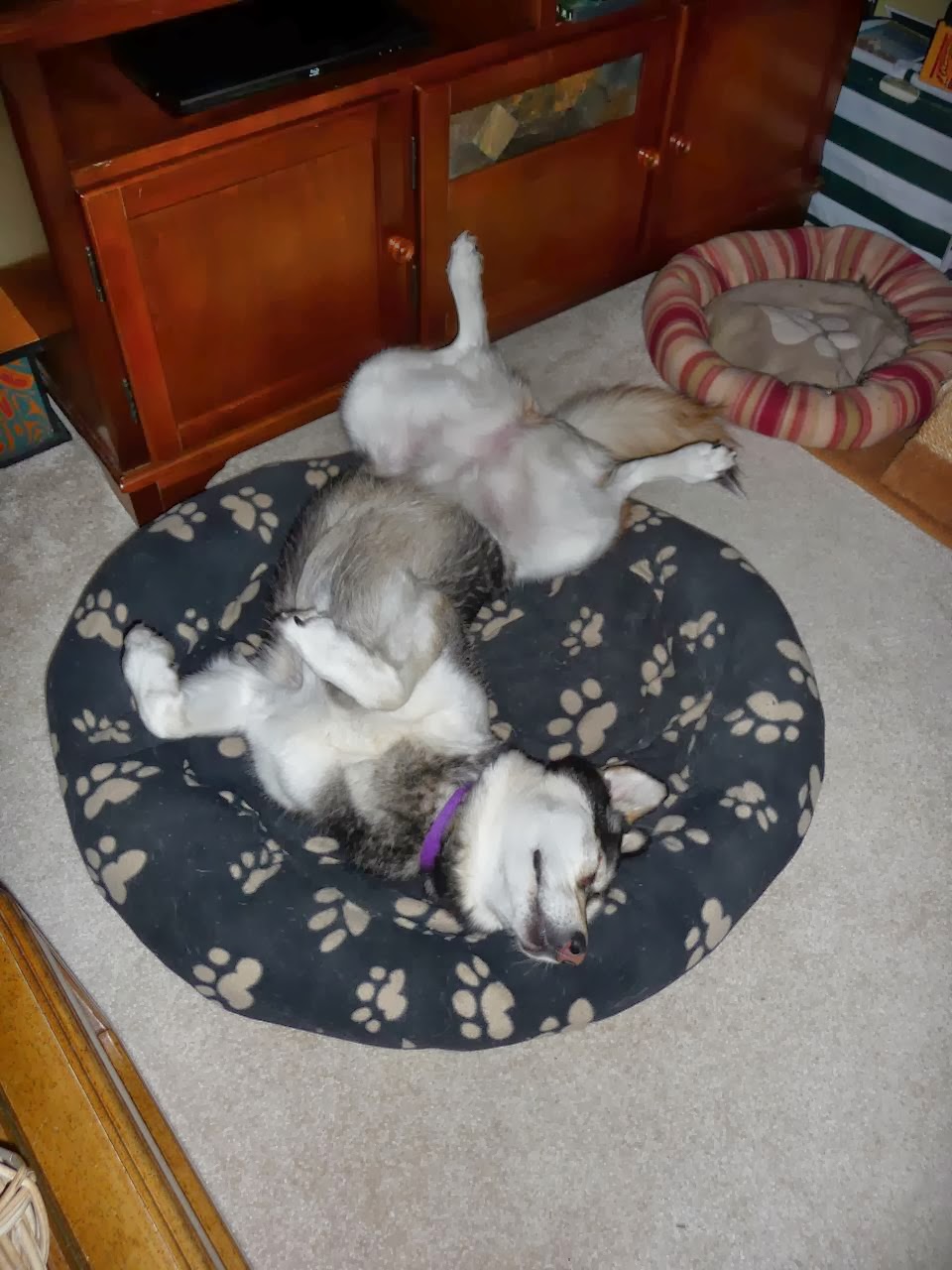 Email ThisBlogThis!Share to TwitterShare to FacebookShare to Pinterest
Labels: Life in general, Pets

It's been a while since I played this game. Last year, I gave snippets from Tiamat's Nest, but I think it's time to give Ghosts of Innocence an airing. This is from chapter 1, where Shayla is about to effect a dramatic entry to the Imperial planet, Magentis, aboard an out-of-control passenger ship. With the expected and planned-for panic erupting around her, she finds herself the subject of some unwelcome attention...

Not Scolt again, she groaned to herself, not now.

She glanced around the lounge, then took his hand in hers. Scolt had taken unwelcome interest in her for the whole week-long flight. Another time, in another life, she might have returned the interest, but even out of uniform the emerald tattoo on his forehead and his preening arrogance had marked him out as a member of the Imperial Color Guard. Not a good bedfellow for a woman with treason on her mind.

Shayla had no time to waste. She gazed into his eyes, smiled, and finally did what she'd been longing to do the whole flight.

She broke his fingers.

We are emotional animals

It's been a week of emotional turmoil this past week. Nothing bad happened, quite the opposite, but all the same the effect has been draining.

Back before Christmas, I applied for another position in Government, and was called for a written assignment and an interview in January. Last week I was told they wanted to make me an offer.

All good news. This was a position I was interested in, it represents a step up, and it sounds like a great fit for my experience.

Being a logical and analytical person, I was prepared to weigh the pros and cons and practicalities and everything points to this being the right move for me.

I was totally unprepared for the rush of unfamiliar and unexpected emotions to follow.

There were the obvious suspects: elation at winning (when I'd more-or-less resigned myself to bad news) balanced with fear of the unknown, and feelings of "am I doing the right thing?" There is still anxiety about leaving behind so much familiarity (I've been working in the same building for over eight years), but relief at the prospect of leaving behind the accumulated baggage of eight years, and sadness at the people I'll be parting from.

But the overwhelming sensation was of being adrift, of not belonging either here or there. I sat in work meetings, suddenly feeling cut off and disengaged like the topics at hand were no longer my concern. The sensation of suspended animation was heightened by anxiety that it wasn't yet entirely real. It was a couple of days before I had a chance to sit down with my new boss to discuss the offer, then I informed my direct colleagues, then waited for a more formal communication to be emailed out. All this time I felt like I was adrift between two worlds and that events had suddenly taken a life of their own. There will be more of that to come, as I start to hand over my duties and begin to move into my new role.

Meanwhile, I started to feel better yesterday when I finally found time to sit down and start making notes to hand over. That simple act gave me a much-needed compass bearing for my nervous energy. And I started to feel excited by the possibilities and what I hope I can bring to my new team. That has got to be a good sign.

The lesson is that, much as we like to think we are rational and in control, that is a long way from the truth. Like a dinghy in mid-ocean, while the waters are calm and the wind is steady we can choose our heading. But when the storm rises, the best we can do is cling on and hope to stay afloat. The illusion of control is shattered.

We are, by nature, emotional rather than rational animals. When we get a gut feeling, we may try to rationalize it or argue against it, but all we are really doing is trying to fool or persuade the emotional being at our core that is really calling the shots. And that rarely works, because it is evolutionarily older and wiser than our rational selves.

And that emotional self has been well and truly at the helm this past week.