The financial meltdown three years ago showed the world just how fragile the global financial machine has become. We are still feeling the aftershocks, with America's recovery hanging in the balance, and the drawn-out protests against austerity measures in Europe proving hard to contain. Either of these limping giants could fall and plunge the world into chaos again. 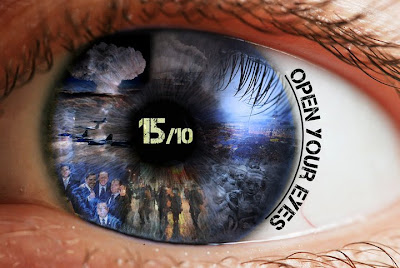 Meanwhile, the Wall Street protesters, and others joining them in their outrage, have a point. Where is the ordinary citizen in this equation?

They are directing their anger at the people at the top of the monetary food chain: senior executives and the super-rich.

That is a worthy ideal. Individual greed certainly doesn't help matters, and when the majority of people are struggling, it's galling to see others sitting pretty and visibly not caring.


The way I see it, though, these efforts are unlikely to achieve anything lasting unless they understand and act on one significant fact:
These people are no longer in control.
In fact, they probably never were.
What? These are the decision-makers aren't they? Surely all they have to do is choose to act differently and all will be well?
Firstly: fat chance of them acting differently. Human nature is deeply ingrained. And even if you get rid of them, every revolution in history has simply swapped one corrupt and self-serving oligarchy for another. To put it simply: shit floats.
Secondly: I don't believe these people are truly in charge, or in a position to effect real change. As individuals, they are as powerless as the rest of us.
Human society has grown into a complex ecosystem of super organisms - governments, corporations, NGOs, religions, protest groups. I use the word "organism" deliberately, because I think this is the most useful way of looking at modern institutions - as a new form of life.
I think the analogy is apt. Living cells metabolise. They take in a food sources and nutrients, and process them chemically to release electrons in a way in which they can be put to work. Along the way, they produce waste which has to be disposed of.
I don't think modern organisations are any different. Their "metabolisms" are mainly directed at producing money which can be put to work to ensure the organisation survives. They take in raw materials, knowledge, labour, and free up cash by processing these into goods and services.
The latter are, in effect, nothing more than waste products of this metabolism. The fact that these products are mostly useful, even essential, to our well-being has become only a secondary concern.
This used to be the main purpose of agriculture and industry - produce things that people need in order to survive and live well. But I think the whole setup has been flipped on its head. The wheels of commerce have taken on a life of their own, and our role as consumers has become little more than waste removal.
Does that paint a pretty picture?

Now, here's the rub. The fate and wellbeing of individuals is not the primary concern of any of these institutions. No more than your body cares about the survival of any one cell.

People are no longer the beneficiaries of society.

Let's be clear now. I'm not saying that many individuals within these organisations don't care for the welfare of others. I'm saying that the collective, the organisation as a whole, has taken on a life of its own that does not have our interests at heart. This is an example of an emergent phenomenon, where seemingly simple rules acting en-masse can have surprising and unpredictable outcomes at larger scales.


I believe that the only way to achieve real change is to focus efforts not at the obvious individual targets, but on understanding this new ecosystem.
I think the efforts to change the behaviour of individuals is misguided. We need to change the behaviour of these new animals that we have built around us, that we are part of.
We need to understand how big institutions behave. What motivates them to behave the way they do? And, ultimately, how can we alter this intangible ecosystem to bring about behaviours that benefit ordinary individuals once more?
We need to find ways to reward organisations and governments not by how much revenue they can create for themselves or shareholders, but by how much they enhance the wellbeing of ordinary people.
In short, we need to give our global institutions a new diet, a new metabolism.
Posted by Botanist at 1:26 PM

Email ThisBlogThis!Share to TwitterShare to FacebookShare to Pinterest
Labels: Rants, Science and nature

We have had a round of huge increases in energy prices in the UK and it was announced yesterday that the utility companies profits have grown enormously. I was thinking yesterday that maybe energy supply should be owned and controlled by the state but then you start to get inefficiencies and still pay higher and higher prices.
So, maybe companies working to make profits for shareholders results in high efficiency. I don't know but I suspect that your ideas, though noble, would be non-starters.
Click here for Bazza’s Blog ‘To Discover Ice’

You make such good points, Ian. I absolutely agree that the protesters here in New York are not really going to accomplish anything, and that the ones they are protesting against were never truly in charge to begin with.

Like you, it does make me wonder how we can possibly ever change "the system." I'm not so sure it's even possible to do so anymore.

I fear that nothing will change because of the protests as well, but I also hope they will. There is one example and a recent one- in Iceland. The economy had to completely crash first (which I hope doesn't happen here) but nevertheless the people had had enough. Where? In Iceland and no one is talking about the aftermath. You can read about it here: http://www.nakedcapitalism.com/2011/10/iceland-from-crisis-to-constitution.html
I don't know if it's possible anywhere else but it does give one a teensy bit of hope.

Bazza, I certainly wasn't advocating more state-owned control. That has its downsides too.

David, I have to keep myself optimistic that something can be changed, but I think it will take significant new insight and changes in the right places to be effective.

Danette, thanks for the link, that is fascinating. I agree though that we don't want to wait for complete collapse first.

Botanist, what you're saying makes a lot of sense, but we need people to be willing to make the change. Most of our leaders are just sitting around living pretty and not giving a darn about their fellow man. We need someone to take the first step. It's a global change that has to start somewhere, and that's with respecting each other and doing what's right. :)

Good points, Laila. However the problem right now isn't willingness (witness the demonstrations in a thousand cities across the world on Saturday), but of finding the right change to make that will have the right effect. I'm afraid it will take someone far cleverer than yours truly to come up with that insight.

Hey, Botanist! Any chance this link works for you? It should bypass the post and go directly to the Linky List--so, maybe that'll help. If not, let me know and I'll add you. :)

I think mankind should take a step back and reconsider simpler things. I wish we could live in a world where the food actually tastes like food and nature plays a bigger part. I am more of a dreamer I guess... but I have the feeling that nature will eventually spit us up like a bad seed when we will have reached that limit of good sense.

Scary, isn't it? And we don't really live long enough to learn from our mistakes.

Thanks for the help, Carrie, I think it was the linky list site itself that was the problem. I've signed up on your blog now, see you next week :)

Unikorna, I'm all for keeping tings simple, but I suspect that complexity is here to stay and has become essential to support our massive population.

Donna, the thought that we are out of control is scary. Not saying that we've necessarily made a mistake - emergent phenomena crop up as a natural result of massive connectedness - but we sure as heck need to learn how to bring this world back under control.