The dreaded Captcha is being replaced on some blogs by an innocuous check box saying "Please prove you're not a robot".

Up to now, on blogs I've visited this simply involves clicking on the box and posting the comment. This morning's, though was different.

When I clicked on the box, up popped a new form that at first I thought was an irritating pop-up advertisement for something to do with cookery. After a few second's hunting for a way to dismiss the intrusion, I realized it was part of the verification process.

I was presented with a dozen pictures of food, and the instruction to click on all those that involved pasta or noodles. Sounds easy, except the images were too small and grainy to confidently tell in many cases what they were pictures of. I tried, but didn't find enough to satisfy the beast and it gave me a new test. Ice cream this time. This was easier because they were more obvious, but there were clear cultural assumptions at work. Who outside of North America, for example, would know that a round carton with a big "DQ" on the side needed to be clicked?

In my view, this now officially surpasses Google+ and Disqus in the "pointless ways to piss off your readers" stakes.

I can guarantee that if your blog inflicts this on me I will not be leaving a comment.

Email ThisBlogThis!Share to TwitterShare to FacebookShare to Pinterest
Labels: Rants

Isn't it strange how technology has changed us in just a few short years? Sometimes I complain about the "always connected" life we live, especially the kids with their iPhones surgically implanted into the palms of their hands, but even I, dinosaur and closet Luddite, feel somehow vulnerable if I leave the house without a phone.

Sometimes, though, it can be handy.

Just about to leave work this evening. Phone rings. Ali, telling me to avoid the highway. Tailback northbound almost back to the edge of town, so find an alternate route. She's caught up in the middle of it so I might be home before her despite setting out a lot later. I travel on side roads and rejoin the highway several miles up, beyond where accidents usually happen.

Beetling along nicely - and thanks for the warning - when I hit another slow patch and finally reach the actual source of the trouble - a nasty accident in the other lane. If traffic northbound was slow, southbound from that point on was worse than I've ever seen it. I need to turn left at some point but all the intersections are snarled up with oncoming traffic trying to escape the mayhem.

Call Ali (before you ask, hands-free and legal!) to check on her progress - not a true necessity, but peace of mind counts for a lot at my age. They've made it past the crush. Better yet, they'd made another diversion down to the coast and just spotted a pod of orcas out in the bay. I was in time to join them, but if we hadn't been connected I would have missed the sight.

Everyday technology does have its perks.

Does music help you work?

For writing, I generally find music more distracting than helpful. Maybe writing - actually stringing together coherent sentences - just doesn't come so naturally to me so I need to really focus to get anything done.

But I'd forgotten how much I used to enjoy music playing while I paint. For me, painting makes less of a mental demand but it's surprisingly physical, so the right kind of music helps keep the brush moving.

On this gorgeous spring day I've taken a spur-of-the-moment day's vacation. A "me" day. Just because.

With no particular pressure to do any of the usual weekend non-fun stuff, it's been pleasingly productive. I've almost finished the background artwork for Tiamat's Nest. I need to sharpen up a few details here and there, but it's pretty much ready to hand over to my designer. 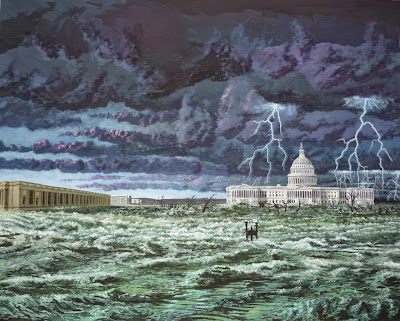 This is intended as a full cover spread - both back and front covers for the paperback. The front cover will just be the right-hand half of the image, and there are a couple of other visual elements to be overlaid on top by the designer.

The last sections of the foreground were painted this morning to the strains of Tangerine Dream.

Do you find music helps or hinders you? A must-have or a no-no?

Is it safe to come out yet? *Peers cautiously out from under rock*

I might give the A to Z challenge a go another year, but it is a big time commitment and I chose to spend it on things other than blogging. Even not taking part, the sheer volume of posts flooding my dashboard in April was overwhelming, so I visited a bit but mostly stayed out of the way.

Work is hectic and intense - not unmanageable, but certainly draining. Life outside of work brings the usual Spring activities getting things straightened out after the Winter months. In between the two, the logistics of after-school activities seem to get more challenging with each passing term.

Fortunately, I've still found time for artwork. The cover art for Tiamat's Nest is progressing well and I think I'm on the home stretch.

How was your April? Did you survive the A to Z?