Continuing a scene from my first book, Ghosts of Innocence.

Shayla has stolen the identity of a newly-appointed senior public servant, and infiltrated the Palace in disguise. She has previously fallen foul of her new boss, Mabbwendig ap Terlion, Master of the Emperor’s Domestic Household, and is confronting her again in the cavernous staff dining hall. Mabb has been tormenting a series of unfortunate individuals among the hundreds of people crowding the hall.

A waiter removed Shayla's barely-touched plate, and returned with a dish of mousse molded in the shape of a swan.

He frowned. "She normally picks on more people, but her barbs cut unusually deep tonight."

Mabbwendig looked up from her plate. Her eyes roved across the sea of faces like a hawk surveying a meadow. "Time for music, I think." Her face creased into a smile. "Tanya."

Jojo groaned under his breath. "Poor Tanya, not again."

The Ashes of Home is into its final rounds of reading and editing. I’m at the stage where I’m kinda thinking how many more times do I have to read this thing? Let’s just get it off to the book designer!

However, my pre-publishing process this time around included a new step that I’ve not gone through before - and almost forgot about in the excitement! Inserting chapter breaks.

I’ve talked about this approach a couple of times before, where I’ve written the draft as a series of scenes without bothering too much how to break it up into chapters. It certainly paid dividends during rounds of edits where I’ve been able to easily move things around and even insert whole new threads.

Now I’ve got past that point, and decided the text and order was settled, it was time to break the story out into chapters. This proved an interesting exercise in its own right. I flipped back and forth between my scene summary list and the actual text, looking for suitable chapter units. 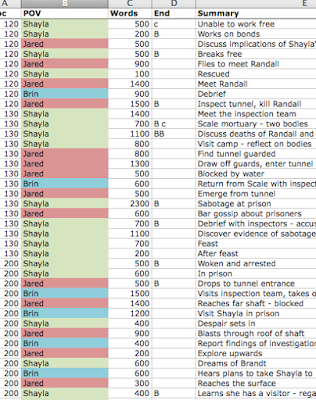 It was a bit of a back-and-forth game, trying to ensure chapters were logically coherent, and not too long or too short. There were some points where I felt a natural chapter break should occur, and I tried to work around those.

While I was drafting, I broke the text into more scenes than I strictly needed to. Anywhere there was a natural potential break, I put in a scene break. Some of these I ended up rolling together - with a regretful sigh ... yes, this would have been a great cliffhanger, but the real chapter break comes just a little later. Let’s not make it too disjointed.

While I draft, I divide the manuscript up into a dozen or so separate documents for ease of editing and navigation. I have always expected those major divisions to also signal new chapters. In this case I surprised myself  a couple of times by continuing chapters from the end of one document into the next. I don’t think I’d have even considered that possibility before.

I even did a couple of last minute scene order swaps at this late stage. It’s surprising what a different perspective on things like flow you get when you take this aerial perspective.

One last thing I noticed, which I really didn’t expect, was a lot of pleasing patterns and symmetries in the point of view switches within many chapters ...

Continuing a scene from my first book, Ghosts of Innocence.

Shayla has stolen the identity of a newly-appointed senior public servant, and infiltrated the Palace in disguise. She has already fallen foul of her new boss, Mabbwendig ap Terlion, Master of the Emperor’s Domestic Household, and is confronting her again in the cavernous staff dining hall.

Shayla was forced into upstaging Mabb at the start of the meal. Skipping ahead a few paragraphs, Mabb is making her displeasure felt.

From time to time, Mabb's voice rose above the hubbub. "Yama, hair looks like rats' tails."

A wide-eyed girl looked like she'd been slapped. She stared at Mabbwendig, lower lip trembling. A lustrous river of immaculately-groomed hair hung to her waist.

"Shave it off." Mabb waved her hand dismissively. "Farouk, rose beds in Fountain Court are a disgrace. Tomorrow, you personally inspect and groom each plant. Emperor must have beauty to look on while he works."

I’m looking for opinions on this stylistic choice.

I’ve always written ‘towards’, ‘forwards’, ‘upwards’ etc. with the ‘s’. In critiques on The Ashes of Home, there were a few spots where critiquers picked up on this and said it was incorrect.

I’ve never given this a thought before, and certainly never had anyone question it, so I did some research. Grammar sites seem pretty consistent in saying that both forms are correct, but there is a preference for dropping the ‘s’ in America and keeping it in Britain and Australia.

Most of my sales tend to be American so I decided - with some reservations - to go with the flow and dropped all the ‘s’s. Now I’m re-reading, it sounds plain wrong to me. I believe I’m going to revert back to what sounds natural to me, but I thought I’d also sound out some opinions on your preferences as readers.

(2) Do you expect the author to be consistent - all one form, or all the other - or does it depend on what sounds best in context?

The reason for (2) is that some contexts seem to beg one form rather than the other. e.g. I would say “He ran forwards” but “He looked out of the forward viewport”.