Quick aside: We almost didn't notice it, but this week we passed our ninth anniversary of landing in Canada. Nine years! It feels unreal. So much has happened in that time.

Earlier on in the summer, I did a couple of posts about the business side of this tangled mess we call "writing".

I'm a bit of a measurement freak, and I firmly believe that you can't hope to manage something unless you measure it somehow. One thing I want to manage better is time. Your own time is a huge investment. In the writing world, it is probably the biggest single raw resource you consume in producing your finished product.

I can't imagine any serious business surviving without some reasonable understanding of how much time it takes to do things, so I've built this handy little spreadsheet that acts like a stopwatch. Click on the "start" and "stop" buttons and it adds the time into a running total against whichever task I've got selected.

This is my first step to getting a handle on things in a more businesslike way.

What I've learned so far

Since July, with all the demands of Real Life, I've averaged only 45 minutes a day on writing-related activities.

Note that none of this was actual writing. Right now I'm not in writing mode, I'm in between critiquing and revising and I'm including all the multitude of roles that wrap themselves around the writing process.

The lion's share of this effort has been pushing through the critiquing process. Most of the rest was on drafting cover art.

The bad news is that, at 45 minutes a day, getting anything done is a long process.

The good news is that I can better see what needs to be done, and gauge the success of any strategies I come up with for spending more time on writing.
Posted by Botanist at 2:38 PM 4 comments:

I've always been an avid builder, needing to create things from some blueprint or other in my mind. As a child, this showed up in the hours I spent playing with Lego and Plasticine (modeling clay), and later on building model planes, tanks, and ships. Warships were my favorite. I was always absorbed by their visual appearance and physical intricacy.

Nowadays, my creative urges are fulfilled by all those grown-up building projects over the years, such as the pirate ship and tree fort, by writing and painting, and occasional wistful plans for when we win the lottery.

All these things take a lot of energy and concentration, and sometimes I feel the need for less demanding outlets, something that brings more immediate gratification. For this, I've turned to Minecraft. I use the Pocket Edition in Creative mode, solely for construction projects.

Right now, I'm building a WWII-era battleship - generic design, not meant to represent any real vessel. I did one of these a while back, just to see if I could, but at that time I only focused on the exterior. Apart from the engineering spaces it was an empty shell.

This time around, I'm building it from the keel up and trying to make a fairly realistic representation.

I've also discovered that this kind of thing is a popular subject in the Minecraft community (try Googling "Minecraft battleship" for some examples), which is kinda scary. I guess it officially reinforces my nerd status :)

So, I know this may be of limited interest to "normal" people out there, but what the heck, this is my blog and you can always skip if this isn't your cup of tea.

Here are a few screen shots of the battleship project as it takes shape up to the waterline, so if you'd like, follow me on a guided tour of the lower levels...

This is the stern of the ship. I researched online for a game seed that would give me a lot of water, because I knew the ship would stretch most of the width of the world. In this case there was ice along one side, so the bum end wound up embedded in the ice. 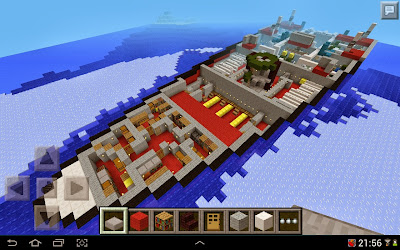 You can see storage compartments, and three propeller shafts in yellow. The green platform rising up beyond them is the base of the after 16" barbette. The cylindrical rotating structure and gun turret will be built on top of that. On either side, the powder magazines deep in the ship are still exposed.

Next, we have the engine rooms. The after room holds two sets of turbines driving the outer shafts. Next door is the central turbine set flanked by steam condensers and other machinery. 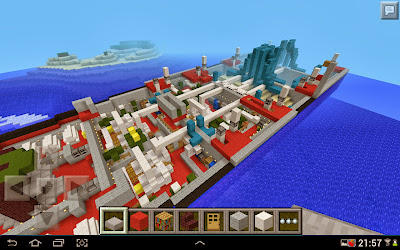 A large part of the spadework up to this point involved building the shell of the hull and emptying it of water. This is one of the reasons my first attempt didn't pay too much attention to the interior. It's difficult working underwater in Minecraft because it gets so dark, and emptying out the water is painstaking work. But I'm glad I put the effort in this time, because this gives me a more complete structure to fill in.

Here is a side-on view of the three boiler rooms. I've used blue blocks to represent the funnel uptakes. The forward uptakes will continue curving aft to meet up, giving me a single large funnel. 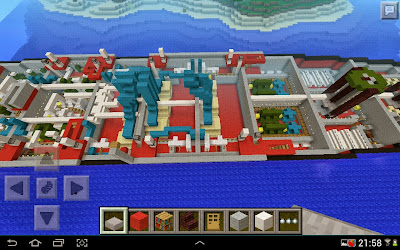 Forward of the boiler rooms is the electrical generation room, and the base of "B" turret rising high above the waterline. In this view, you also have a clear view of the white columns rising up, four each side, which are the 6" shell hoists for the secondary armament.

Finally, we come to the bow section. 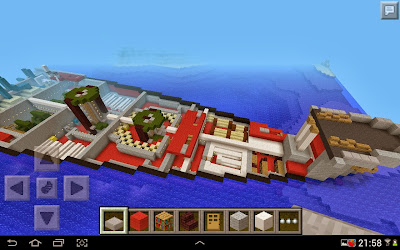 Mostly storage here, and a clear view of the two forward 16" emplacements. "B" turret still has the powder magazine showing, while I've started building the overlying shell room for "A" turret.

Next stage is to finish off the sections showing, and deck them over ready to start the next level.

Yes, nerdy I know, but I find it strangely therapeutic.
Posted by Botanist at 1:20 PM 9 comments:

Email ThisBlogThis!Share to TwitterShare to FacebookShare to Pinterest
Labels: Interests

Holidays here and there

Since moving to Canada nine years ago, we've found the cycle of seasons has been marked by a very different calendar of holidays and celebrations.

Halloween was a recent and not especially welcome interloper, with trick-or-treating seen as an excuse to roam neighborhoods demanding money with menaces.

This side of the Atlantic, we seem to have more excuses to party, and each one has its own distinct flavor.

Christmas here is very similar to Britain. Lots of food and festivities...and ugly commercialization. The big difference is sniveling reluctance to actually use the C word, which I ranted about a couple of years ago.

Halloween is a hugely different affair here, and is a really fun family time. Children dress up, many households make a big effort to decorate, and there are bonfires and fireworks.

Then we have Canada Day, parades and parties all round. And more fireworks.

I was astounded to find Remembrance Day marked here more widely than Britain, with crowds of all generations still turning out at cenotaphs across the country.

Of course, this weekend is Thanksgiving in Canada.

Whereas most holidays are highly visible to anyone wandering through, I think of Thanksgiving as our secret celebration. It's such an intensely personal family affair, marked by gatherings of friends and families behind closed doors and with little outward show, that it's hard for an outsider to see just how big it is.

We've been privileged to be invited to a few Thanksgiving parties here, which were memorable experiences. With no family of our own here it's usually just a quiet turkey dinner for four, but it's still something we've grown to take seriously.

So, Happy Thanksgiving, Canada!
Posted by Botanist at 9:05 PM 8 comments:

Email ThisBlogThis!Share to TwitterShare to FacebookShare to Pinterest
Labels: Immigration, Life in general

I've been a mostly absent blogger this summer, and I've found the blogosphere in general rather quiet lately, but I hope a few folks are hangin' in there because I want to ask some advice.

As I mentioned a few posts back, I'm throwing around ideas for cover art for Ghosts of Innocence. I've done three rough drafts, all based on scenes from the book, and I'd like your opinions. Bear in mind, these are only rough and meant to illustrate the idea. My hope is to work with a book designer on details and develop one of these into a proper cover. 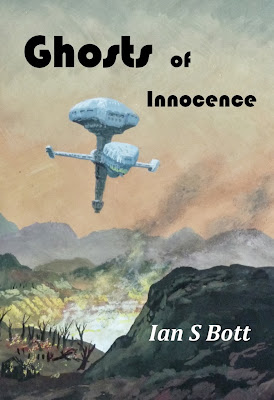 #2 - Seeking refuge on a starhopper 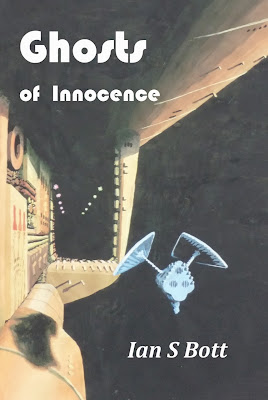 #3 - Flight from the Palace 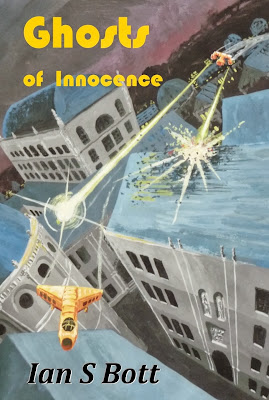 Do any of these catch your eye? If you saw this on a bookstore shelf, what kind of story would you expect to find behind the cover? Do they manage to convey military sci-fi? Are there any particular elements that you think work, or could do with improvement?

Thanks for your help!
Posted by Botanist at 3:29 PM 17 comments: