OK, I'm enjoying my blogging holiday, turning my mind to things other than the blogosphere for a while.

But I still lurk from time to time, and therein lies my undoing! I'm a bit of a sucker for a good blogfest challenge, and I strayed onto Ellie Garratt's blog and found one I couldn't resist. 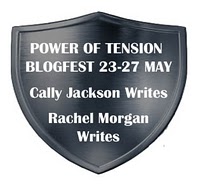 The Power Of Tension Blogfest, hosted by Rachel Morgan and Cally Jackson, asks you to 'Give an excerpt (up to 300 words) from your manuscript or recently completed work (or just a random scene) that just drips with tension and will tie us up in knots wanting to know more. It doesn’t matter what the piece is about, as long as it screams tension.'

So, here is a random excerpt from Ghosts of Innocence...


"Chalwen, we can't override the commands. It's no use. The system's programmed to respond with lethal force and we can't disrupt it."
Chalwen nodded. "We can keep them away from the planet, but only until we run out of ships. This is not a battle we have any hope of winning."
She sighed deeply. "Everyone, leave the room." The guards and crewmen looked uncertainly at each other. "That's an order." Her voice was little more than a whisper, yet it carried more weight of authority than the loudest parade ground bellow.
As the room emptied, she murmured "Henri, you stay. I need a witness for my actions here."
Shayla watched, heart thudding, as Henri closed the door behind the last guard.
"Captain Iona bin Terallini had a son serving on Osprey." Chalwen's voice was flat. Emotionless. More fearsome than the most violent rage. The eye of the hurricane.
What's she planning to do to me?
Shayla had always considered herself tough. She had been trained to resist interrogation. She knew her training would kick in automatically, whether she wanted it or not. Now she was terrified of where that training would carry her. What agony would her inner self force her to undergo before the subliminal conditioning broke? These people had turned torture into an exquisite art form. The things she had seen, the pain, was something training never prepared you for. And she knew she couldn't face it.
But Chalwen ignored Shayla and turned to where the Emperor had sat, unmoving, throughout the whole battle.
"Julian, I beg your forgiveness for what I have to do." Tears ran freely down her face.
She drew a beam pistol and checked the magazine. Hands trembling, she placed the snout against the Emperor's temple.
Posted by Botanist at 8:52 PM 29 comments:

The Bald Patch is taking a blogging vacation for the month of May, and possibly into June, to recharge vital energy, to get some essential Spring maintenance chores done so we are all set for when Summer arrives, and to try to kick some life into my sadly-neglected WIP.

Have a wonderful and invigorating Spring.
Posted by Botanist at 8:10 PM 8 comments: