And you know what that means.

As I mentioned earlier this month, I will be posting alphabetically on topics related to software development.

I have compiled a series of topics which I believe are good habits of thought in the software development process, that should help us build good and useful software.

Although these habits are (IMHO) good practices in any software endeavor, I'm especially thinking about the kind of software that underpins many businesses around the world.

All those applications that pay you, manage your stock room, take orders from your customers on the web. All those applications that armies of people use, day in day out, to keep the business world ticking over. I don't care whether they are swish web applications, mainframe green screen, or cobbled together in MS Access or a raft of spreadsheets. If you ever string together lines of code and calculations to achieve a business goal, then listen up!

Why do so many of these applications make you feel like you're battling an octopus just trying to get through the day's work?

Why do so many of them suck?

This series says it doesn't have to be that way.
Posted by Botanist at 8:04 PM 9 comments:

Email ThisBlogThis!Share to TwitterShare to FacebookShare to Pinterest
Labels: A to Z Challenge

From Seattle with love

As a follow-on to my last post, there were many things that made our brief trip to Seattle enjoyable, but I wanted to offer a few special acknowledgements.

The Westin Hotel was an excellent choice to stay. Ideal location, central downtown with plenty of shopping and eating within a few blocks, and right alongside the monorail and light rail stations. The room was comfortable, it was great to relax in the pool after a day on our feet, and the staff were welcoming and helpful.

Tutta Bella Pizzeria served up mouth-watering pizzas. Half-way through, Megan realized hers had a bit of a chilli bite to it and she started to struggle, torn between melting deliciousness and unaccustomed heat. When our server cleared the table, Megan mentioned this and he apologized, and suggested a gelato to cool her down. On the bill, we found:
Gelato $2.50
Love -$2.50

How sweet was that?

The pizza was really for Matthew, so the next (and our final) night was Megan's choice. She fancied tacos. We found a nearby Mexican restaurant online, but when we got there it was closed. More online searches directed our feet along a few streets, by now looking for anything vaguely hospitable. Most places seemed either shut or shutting for the night, or uninvitingly empty...

Getting hungry, we stumbled by accident on Space Taco. Clearly it was meant to be. Wonderful newly-opened restaurant. Warm atmosphere, delicious food. Megan was happy, Matthew was happy, we were happy, and the owners introduced us to horchata, a delicious rice drink that we are going to try at home.

We sailed down to Seattle on the Victoria Clipper. When we checked in for the return journey, they canceled the sailing due to strong winds making the sea dangerous for the little catamaran.

This is where travel companies usually fall down. No matter how good the travel experience when things go right, what really counts is how you handle your passengers when things go wrong.

Victoria Clipper staff were wonderful. They confirmed immediately that they would get us to Victoria that day. They kept us regularly updated on progress, and were open about what they didn't yet know (e.g. which port we would be sailing from and when we'd arrive). It took them time to line up a couple of coaches, then they drove us across the border to Vancouver, where we caught a BC ferry. All the while, the accompanying staff checked in with us and talked through what was going to happen next, at the border crossing, and on the ferry. Yes, we arrived home a few hours later than planned, but the way we were treated made it an excursion rather than an ordeal. In those situations, honest information is vital. Kudos, Victoria Clipper.
Posted by Botanist at 9:12 PM 10 comments:

It's Spring Break here in Victoria, and we just returned from a brief trip to Seattle.

First time to Seattle. First time, in fact, to the USA, even though it's just across the water and is visible from our living room window.

We packed a lot into just two days (plus traveling on either end), including Pike Place market, the Aquarium, and the Science Center. We had to be choosy, missing out many more major attractions. Maybe a future trip?

We are used to living on European time when we're on vacation, often not eating until 8pm. That works when we're doing our own catering, but not so much when so many places seem to close early. North American cities seem to go to sleep just when Europeans are starting to do business. In this instance, though, it turned out for the best because in our slightly extended meandering we stumbled on a wonderful Mexican restaurant only recently opened and not yet featuring on web sites.

The other persistent impression was the lack of traffic. I couldn't believe how empty the streets were for such a large city, even on a normal work day.

Visiting the Space Needle. A must-do for visitors - it's such an iconic Seattle landmark as well as offering stunning views. 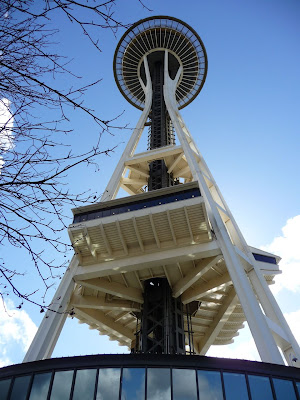 The Museum of Flight. We made a day of it and spent five hours there. Could easily have spent as long again, except we were tired and footsore after so long on our feet already. 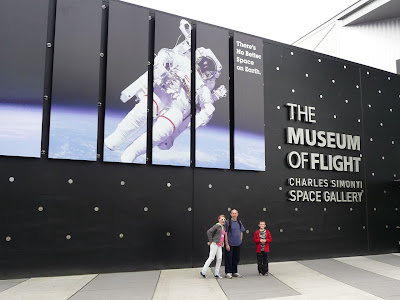 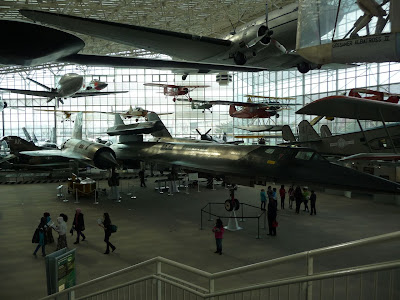 Unexpected treasures. On trips like this, as in writing, I like a bit of structure but not so much as to be constrained and regimented. This gave us freedom to take a few unplanned diversions as the fancy took us. One such gem was the Seattle public library - a huge building with a viewing gallery on the tenth floor giving vistas both outside and down the vast atrium. It warms my heart to see people still investing in the art of writing.

I reckon the architect had a grudge against window cleaners though... 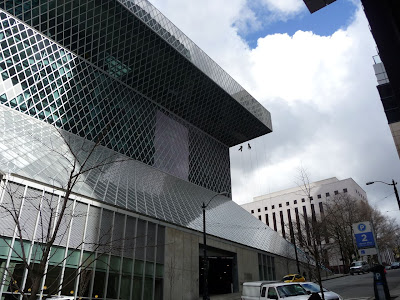 For the kids, I think a major highlight was simply staying in a hotel. This is their first time since we moved to Canada, and they were too young then to remember anything about previous times.

It was good for the adults, too, not to have any cooking or cleaning for a few days, and to be able to unwind in the hotel bar with a beer, surrounded by good places to eat within easy walking distance.

After our first taste of this nearby city across the border, we are hoping to return in future.
Posted by Botanist at 6:19 PM 9 comments:

I loved the comments on my last A to Z related post, trying to guess what my theme for this year might be.

All good guesses, and perfectly logical from what you see of me on this blog, but all way off the mark. Nobody hit on my day job, which is probably fair because I make a point of not posting about it too much.

This year, I will be posting alphabetically on topics related to software development.

* Pause for my two readers to polarize into opposing camps *

That statement probably had tech-heads salivating at the thought of posts on SQL, Java, OO, and server virtualization, and had everyone else running for the hills.

There will be none of that tech-speak in this series

If anything, it's quite an anti-nerd series. I will be posting about the human side of software development, and the need to keep the geek firmly in the closet when trying to solve real world needs.

I hope it's something non-IT people will find interesting. IT folks are welcome, too!
Posted by Botanist at 8:24 PM 11 comments:

Email ThisBlogThis!Share to TwitterShare to FacebookShare to Pinterest
Labels: A to Z Challenge, The day job

Another random snippet from Tiamat's Nest. This time, it's near the end. Charles just learned that Tiamat has set a trap to lure his family into danger - and himself out of hiding. He abandons his colleagues - Joseph (an online gamer) and Serena (one of his students) - and sets off on his own into the network underworld. He doesn't realize that Joseph is tracking him online.

Serena is speaking at the start of this. Also, note that Tiamat appears online as a golden dragon.

"You're right, he's hopeless in real life, but now I think about it he never had the same problems with artificial, logical structures. He just seems to have the kind of mind that makes sense of it." Almost as an afterthought, she added, "Where's he going?"

Joseph swallowed. "You really don't want to know." He gazed at the blank hole at the heart of the network. An old world map from early explorers might have labeled the uncharted space 'Here be dragons.' Those old timers had it more right than they could possibly understand.

Two little words, so much meaning.

I finally wrote "The End" on Tiamat's Nest this evening. The first draft is finished, at just over 75k words.

I started this story back late in 2009, but ground to a halt after three months and 14k words. I clearly wasn't ready to write it just yet.

I picked it up again last summer, spending weeks getting my head back into this world and reminding myself of the story I planned to write, then resumed work in earnest in August. Now, just over six months later, I've completed my second novel.

First time around it felt like a huge achievement just to be able to say, "I've written a novel." Those words still tickle me, to be honest.

But now, I know it wasn't a one-off. That means a lot to me.

Of course, as I learned from Ghosts of Innocence, "The End" is anything but the end. It is only the beginning.

First, I plan to let it mull for a while before I think about any revisions. I haven't even printed it off for a full read through yet, and I need to give it a thorough overhaul before it's ready for anyone else's eyes. Then there's the critiquing process, which will likely take the rest of this year. Then more revisions, and then more of the same.

Yes, there is a whole mountain yet to climb.

But, for now, I'm content with the view from base camp.

How do you feel about those words: The End?
Posted by Botanist at 9:12 PM 12 comments: