Getting close to publication

It's been a while since I talked about progress with the business side of writing.

I reckon I'm about a month behind where I'd planned to be back in January, but that is largely down to the slight diversion of starting a new job. That took a big bite out of my time in February and March, but I finally finished the cover art by the end of March and the pace has picked up dramatically this month.

BTW - the blog header currently shows a detail from the finished artwork.

I turned artwork and text over to the book designer, and the cover and interior layout are now in the finishing stages. It was exciting to see my raw text turned into something that looks like the pages of a book! Working through one more proof-read to pick up any last minute edits before the designer finalizes the page layout.

Registered with Library and Archives Canada and obtained ISBNs for print and electronic versions - thankfully this is a free service in Canada, unlike the pricey process south of the border - and submitted a request for Cataloguing in Publication.

If things go well, I hope to have this book released early in June.

Email ThisBlogThis!Share to TwitterShare to FacebookShare to Pinterest
Labels: Ghosts of Innocence, Writing

More of Shayla's plunge from space. In the confines of her re-entry bubble, she is trying to brake her speed before the tiny jet of plasma leaking through the damaged bubble cooks her...

When she could stand the pain no longer, she relinquished her grip and curled into a tight ball, allowing gravity and friction to do their work.

The stench of charred flesh recalled childhood nightmares, and the flight from her doomed home on Eloon twenty three years ago.

As you sow, thus shall you reap. An ancient text came to mind. She blinked away tears and set her mouth in a grim smile.

Weak and nauseated, Shayla felt the roasting temperature subside. Watching the speed, altitude, and temperature displays, she breathed more easily, still relying on oxygen from her mouth unit but thankful for a gradual return to a livable pressure.

Her visor display clocked down the altitude.

A breath of fresh air

This is why I like this time of year... 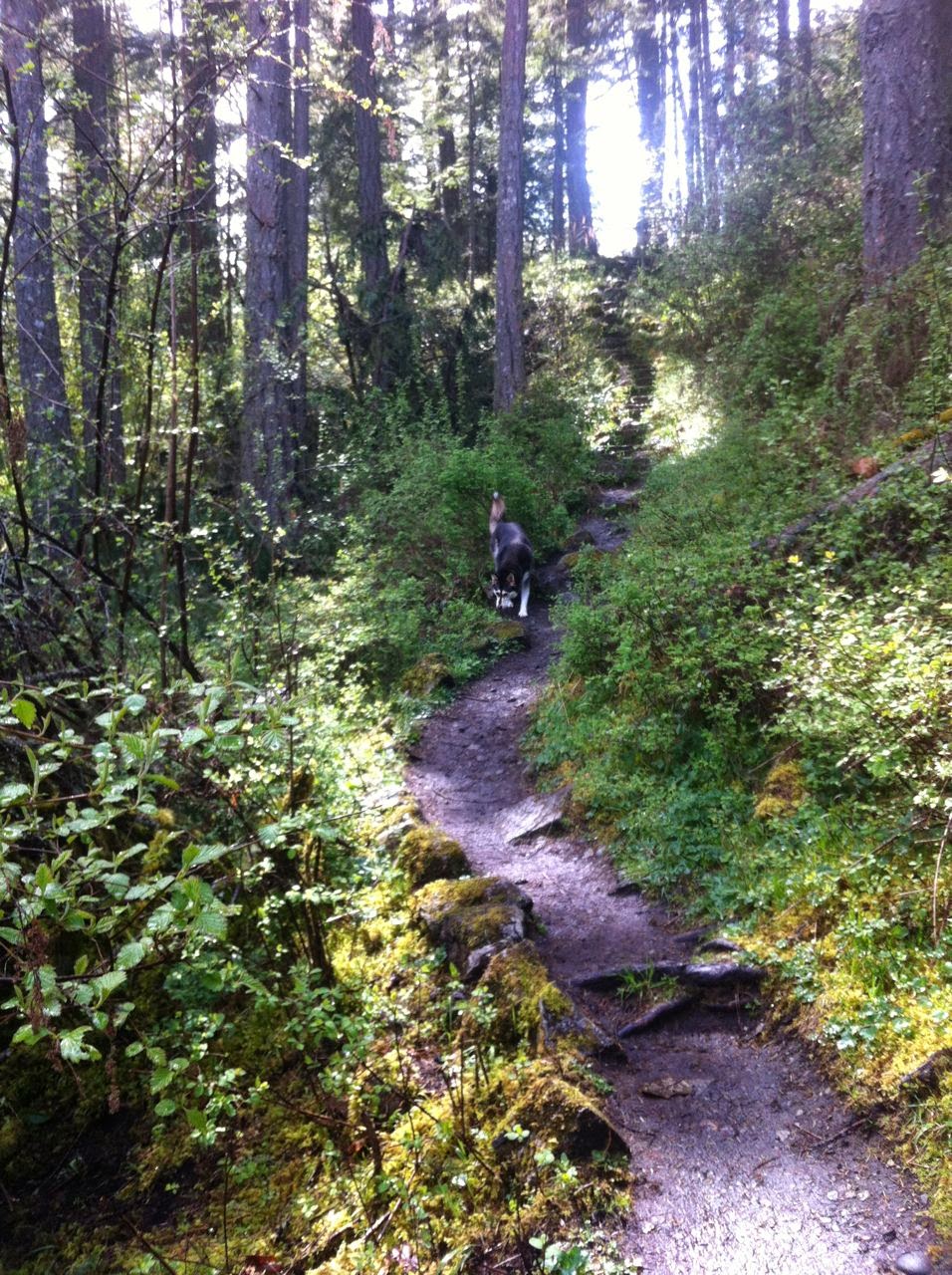 A sunny day, a long weekend, and my first hike of the season in Dean Park, which is just up the road from where we live. The beautiful wooded hill is criss-crossed by a network of trails offering short walks or opportunities to add more distance as the mood takes.

Gypsy seems to enjoy it too.

I don't often review books, but I have just finished - and thoroughly enjoyed - a fantasy series by Jaida Jones and Danielle Bennett.

Oh, no! Not another story about people riding dragons!

Yes, but these dragons have serious attitude and a unique charm, and this is a fresh take on this fantasy staple.

The series follows the conclusion and aftermath of a prolonged war between two mythical countries whose cultures happen to be strongly reminiscent of imperial Russia and China.

Havemercy is the only book where we really get to meet the dragons - the decisive weapons that finish the war - which is a shame because they are offensive, belligerent, and vastly entertaining characters in their own right. They are all destroyed at the end of the book.

Shadow Magic follows the diplomatic efforts to thrash out a peace treaty, despite the defeated Emperor's perfidious attempts to hold the diplomatic mission hostage and launch a sneak counterattack on the conquering country's capital.

Dragon Soul sees one of the legendary dragons almost resurrected, in violation of the peace treaty, while Steelhands follows the aftermath of this discovery and a counter-plot by the other side to recreate the dragon corps.

In all four books, the magic is ever-present and an essential part of each plot, but is understated and only brought in where needed. It's rather like how I prefer my sci-fi technology - a comfortable part of the furniture rather than pushed in front of my eyes waving its arms and yelling at me to admire its cleverness.

Jones and Bennett use multiple third person points of view throughout, but they seem to have specialized in pairing off their POV characters so you get to see different perspectives on the same set of events.

I inadvertently found myself in this situation in Tiamat's Nest when the paths of my two POV characters converged half-way through the book. At first I found this troublesome and I almost resorted to finishing the story from just one POV and ditching the other. Eventually, though, I realized that there were great opportunities to be had from choosing a strategic moment to switch from one POV and then resume the same scene from another perspective.

In all the books, the real plot is masterfully hidden behind an elaborate smokescreen of seemingly trivial events, and the full import of what's happening ambushes you late on in the book. It's a bit like spotting some minor irregularities in a set of accounts that lead you to unearth a global scandal involving world leaders and organized crime.

Finally, there is the cast of colorful and well-drawn characters who bring this rich world to life.

Full marks for an entertaining read.

Posted by Botanist at 8:57 PM No comments:

Email ThisBlogThis!Share to TwitterShare to FacebookShare to Pinterest
Labels: Reading

Last week, we left Shayla plunging from space in a damaged and rather flimsy bubble. In a fight aboard ship, the bubble was punctured now allowing a tiny jet of plasma in...

The plasma of re-entry glowed through the veined skin as she plunged through thickening air. The inside of the bubble was like an oven.

Shayla rehearsed her next movements. Before she had time to reconsider, she reached for the handgrips, her shoulder once more in the path of the intruding fire. Trembling fingers squeezed the controls on the grips. The trailing edge of the bubble split open and eased outwards, spreading to slow her descent and revealing a dazzling circle of blue above her.

A thin shriek escaped her lips around the mouthpiece as she kept hold of the controls, braking her fall as much as she dared.

This is my favorite time of year. The days are lighter, the sun is out (sometimes), and everything is springing into new and fresh growth. Cherry blossom briefly brightens the streets all over town.

I am settling into a new job. The initial feelings of drowning are fading, and I'm now getting to grips with the acute awareness that I've got to start producing results. And there's so much to do it's hard to know where to start.

I'm getting used to that little extra traveling - now based downtown rather than on the outskirts. This is especially true of cycling. First time out, on the return journey my legs seemed to go on strike at the 21km mark, reminding me that we should have been home by now while I persuaded them to keep going the extra 4km.

All this means upheaval that I'm giving the A to Z a miss this year, but I'm cheering from the sidelines for all those intrepid bloggers taking part in the blogging marathon this year.