Continuing the opening from The Long Dark, Jennifer receives an unwelcome message.

Wordlessly, Jennifer plucked the envelope from Galloway’s limp grasp and turned it over in her fingers. The President’s personal seal was intact, and the real deal, as she verified with a tap to her tablet. A physical missive in a pry-proof envelope, primed to destruct if anyone but her broke the seal. Guaranteed confidentiality. A shiver ran up her spine.

The seat’s cream calfskin upholstery cradled her sudden weight as the craft lit its engines and began banking and maneuvering down through thickening air. As they banked, the skyward windows darkened against the sullen glare of the red giant star in the sky.

Tuned to her biometrics, the tablet confirmed her identity and disarmed the envelope’s destruct. A hard and razor sharp thumbnail cracked the seal and slit the flap of the envelope. She read the contents, bringing all her negotiation-table training to the task of keeping her dismay from showing.

And continued progress with the cover art, although to be honest, not much headway this week. It’s been an intense week at work and most days I’ve been too tired to pick up a paintbrush. 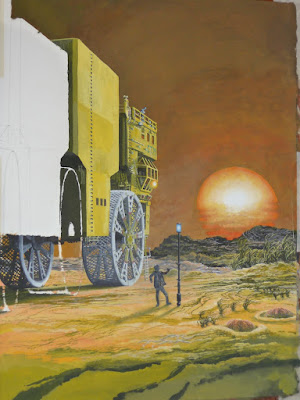 Continuing the opening from The Long Dark, we are still with Jennifer’s point of view.


=====
Jennifer glanced at the three other members of the Company’s senior negotiating team before finally eyeing Simon Galloway coldly. He was no part of her team, and yet he’d invited himself onto her private shuttle, claiming to carry a message of vital importance from the President.

His green velvet jacket screamed extravagance. That, she could forgive, but worn over the top of a cream brocade waistcoat, silk cravat, with silk ruffs at the wrists it was ... over the top. Foppish.

“Well?” Better have this out in the open before her own simmering resentment got the better of her.

“I apologize for the unplanned intrusion.” His voice held no trace of contrition.


“My orders were to bring this to the senior team only once we were off the longship.” He offered a slim white envelope, pinched delicately between thumb and forefinger, pinkie cocked like he was about to sup from a bone china teacup.

=====
And continued progress with the cover art 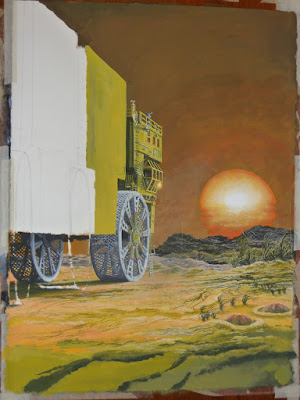 Continuing the opening from The Long Dark, we leave Anna’s point of view to introduce another major character.

Jennifer Steel glared at the beige-green orb of Elysium with mixed feelings. She loved the Company’s princely income from this soggy plant-covered rock, but as for the planet itself, it was hate at first sight.

“It’s going to get bumpy in sixty seconds.” The pilot’s voice held just the right blend of deference and warning. He’d suffered her presence with little sign of the simmering resentment she knew she evoked. She was well aware of the rules about passengers in the cockpit, but she’d been curious to see first hand her reluctant home for the coming weeks. She also liked toying with underlings, a privilege that came with her executive rank.

Even Jennifer, however, knew better than to argue with physics. She turned from the cockpit window and drifted, weightless, back to the luxurious confines of the cabin. She took her seat and strapped in before they hit thick enough air to light the scramjet.

And continued progress with the cover art, snapped on the last two Fridays. Progress slowed down this month because I was struggling with the world news recently as I blogged about last week. 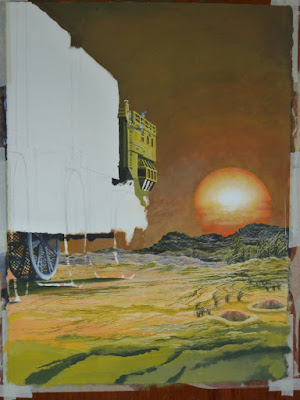 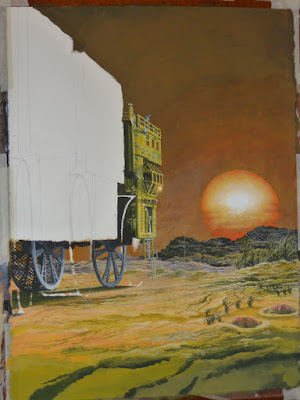 This is a hard post to write. I keep coming back to it, wanting to say something, to vent some feelings, but then hesitating because it feels too self-indulgent. This blog is usually focused on externalities, not so much on inner feelings, but these are not normal times.

Simple truth is, I’ve not been doing too good these past few days.

The realization came during the week when one of my team leads talked about their regular team check-in that day. One of the team mentioned having difficulty sleeping. The events in America dragged up memories of personal experience of racial abuse. In talking it through, other members of the team opened up and shared their own stories. It turned out every single one of them, in one way or another, was struggling to process what is going on in the world at the moment, especially in the US.

At the team leads level, we wondered how much more distress was lying hidden beneath the surface among ourselves and our colleagues. In discussing the emotional impact of extraordinary stories, one after another, day after day, I found myself overwhelmed with emotion.

And I realized, I’m not okay.

That feeling of being overwhelmed and helpless persists. It reawakens with every new story of someone somewhere getting hurt or abused. I am fortunate that it’s not affecting my sleep - yet - but I struggle to focus on anything productive during my waking hours, and tears are never far from the surface.

I am struggling with anguish at the scenes of violence, both on the mob and the individual level. I despair at the peaceful protests turning ugly, often through deliberate instigation of people who have no interest in the protestors’ message. And I am brimming over with anger at the attempts by the powerful to bully a population into submission.

The world has gone mad.

Underlying that is a long-held fury at the systemic abuse of power the 1% “haves” wield over the 99% by the open manipulation of levers of power in their favor, whether it’s passing legislation that favors their rich donors, healthcare and other benefits they award themselves while denying others the same, gerrymandering and manipulating election practices to hamper voting by those they don’t want to have a voice, and a host of other dirty tricks.

This is a bubble that has been waiting to burst.

There is no excuse for the many acts we’ve seen the police commit over the past week.

Equally, there is no excuse for rioting and looting.

Then again, there is no excuse for the deeply-entrenched attitude that the color of a person’s skin entitles one person to set themselves above another. That is the real pandemic that bedevils the world.