Every once in a while, I daydream about what I would do if I were rich enough that money was not an obstacle.

Physical space is very important to me, so these flights of fancy often take the form of designs for houses.

Last night, I started sketching ideas around the "snail shell" concept. This is where the building spirals up to a central core. Here are my first crude sketches for a family dwelling. A floor plan, with lots of crossings-out where I played around to come up with the ideal configuration of rooms, and an aerial view looking over the spacious south-facing deck. I like decks! 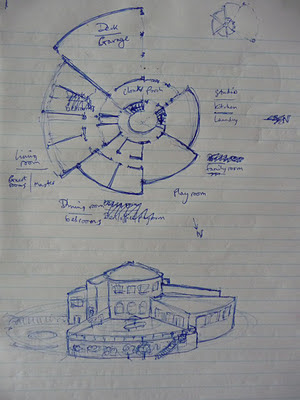 I need to put some thought into proportions and styling because right now it looks a bit like a Martello tower. The idea is to have a low profile with lots of planting around the wider sections to soften the elevation.

I like putting bedrooms on the ground floor, with living rooms above. The central tower is topped off with a large office/studio with all-round views. Preferably of sea and mountains.

Email ThisBlogThis!Share to TwitterShare to FacebookShare to Pinterest
Labels: Flights of fancy

Since moving to Canada, I've become far more aware of the passing seasons.

I think there's a number of reasons for this, changes coinciding with, as well as resulting from, our move.

The most obvious is that we have school-age children now, so the school year is important in a way that it wasn't before. But on top of this, I find the year here is marked by more pronounced seasons, far more seasonal activities that we want to take part in, seasonal produce - berries in summer, mandarin oranges in winter, and peaks and troughs at work. These variations were either less pronounced or entirely absent in Guernsey.

All these combine to give each month its own unique flavour.


January: The lull after Christmas. January is often a low point for me. Packing away decorations for another year saddens me. Everything's dark and gloomy, with maybe a few days of snow to liven things up.
February: Mornings and evenings are noticeably lighter. Try to get back into condition for cycling. Often crisp and bright, things feel like they are starting to wake up.
March: Time to start sorting out the yard, de-winterise the trailer, give the lawn its first cut since the end of last summer. Everything is green and fresh.
April: Looking forward to sitting out on the deck again. After a good pressure-washing and cleaning off all the furniture, of course.
May: The air warms up. We start eating meals outside.
June: Bright and busy. Lots of end of year activities - school fairs, Scouts and Guides.
July: Summer is here. Everything quietens down at work.
August: The height of summer, but noticeably different from July with the evenings already drawing in. Water fights on the lawn. The deck is in shade early evening and not so inviting for al-fresco dining. Sitting in the hot tub before bed, spotting satellites.
September: All the excitement of a new school year. Everything starts off in low gear and ramps up through the month. The lull at work is over and it's madness once more. Some time early in September, it feels like someone's flipped a switch. One day we're in summer, then suddenly there's a chill in the air and I know we're into autumn.
October: Settle down into new routines.
November: Often damp and dreary. Rake leaves off the lawn. Get used to sometimes not seeing real daylight from one weekend to the next. The other low month for me.
December: More excitement in the run-up to Christmas. Parties, parades, decorations, concerts. Whole streets lit in technicolour. Despite the dark, this is a cheerful month.
And so, we start the cycle again.
Posted by Botanist at 8:51 PM 13 comments:

This week has seen several tipping points, significant thresholds, points of no return, coincide in different parts of my life. None of them life-changing, but they all add up to make this a week of unsettling change.

This week, we finally had to have one of our cats put to sleep. It's always a tough decision, especially when it's not clear-cut and an animal is just getting steadily more ill. This one's had cancer eating away at her nose for years, starting off as nothing more than discoloration, but gradually eating into her face. This past year saw a noticeable change, and the last month she'd been deteriorating faster. This week, we decided her time had come.

On another front entirely, today we switched our cable and internet over to Telus. Lots to get used to, but things are looking good so far. I am relieved to have my wi-fi back again to post this.

And last weekend I passed 50% in my novel revision. Now I'm on a roll, and also have a realistic idea of how fast I can plough through this, I am aiming for 100% by the end of February. The word count is still inching downwards, which is good because I need a few thousand words to play with for a couple of scene additions, and I still want to stay below 100k.

Oh, and I've got addicted to Minecraft. I have an innate need to create things, and right now I have no building projects on the go and am not writing original content, so this is helping to keep me sane through the revision process.
Posted by Botanist at 7:54 PM 12 comments:

Email ThisBlogThis!Share to TwitterShare to FacebookShare to Pinterest
Labels: Life in general, Writing

I can't believe we are two weeks into the new year already! With Christmas out of the way, we've been on a bit of a mission to sort out a better deal for our cable and internet.

It all started when Shaw switched over to digital late last year. Our main TV in the living room was OK, we already had a digital box for it, but we also have sets in our bedroom and the playroom which lost most of their channels, including most of the kids' favourites.

Sure, we could pay extra for more digital boxes, but as customers we were offended to be asked to pay more simply to continue receiving a service that we were already paying for. We were quite happy with the old service, thank you very much.

The whole thing reeked of extortion.

So we shopped around.


OK, Ali shopped around and did all the research and phone calls. I don't really watch TV so I have no interest in this side of things.
With Telus, she priced up a package that looked like a much better service for less than we were currently paying. So we arranged a date for them to call in, and phoned up Shaw to cancel our account.

This is where things got strange.

Shaw said they didn't want to lose us as a customer and would cut us a deal. OK. What have you got? Looked at the price and it seemed at least comparable and better than what we currently had. Double-checked with Telus only to find that the price we thought we'd be paying didn't include all the equipment and so would work out more. Shaw now ahead by a whisker. Checked back with Shaw, only to find that they hadn't included everything either.

So we were being ping-ponged back between two sets of customer service departments, both claiming to want our custom, but somehow the price kept on going UP.


Ummm...if you're trying to entice someone, isn't the price supposed to go down?
In the end, thoroughly frustrated, confused, and trying to cut through all the murk of features and offers that were being dangled in front of us to cloud the true price and which, although they sounded good on paper we realised were actually of no value to us, we were at this stage... 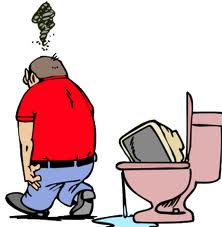 When we did the analysis, we also realised that Shaw weren't actually cutting any kind of deal anyway. Cut away the fluff, and it all amounted to "pay us the extra like we asked you in the first place".

This does not make me feel valued.

So we will soon have a new service provider.
Posted by Botanist at 7:12 PM 10 comments:

Email ThisBlogThis!Share to TwitterShare to FacebookShare to Pinterest
Labels: Life in general, Rants

It's been a while since I posted a snippet about Shayla's world, the setting for Ghosts of Innocence.

I started off with some of the deep history, then wide physical surroundings, and space travel. This time, I'll touch lightly on some more of the human aspects of the worldbuilding. I say "lightly" because this aspect is less well fleshed-out than some other areas.

When I talked about the inhabited star systems, I mentioned a number of distinct types of worlds and political arrangements: those under the rule of one of the six Grand Families, the independent Freeworlds, and the outworlds.

One thing these all have in common is that they are all oligarchies of one form or another. Some more benevolent than others, they are all still built on well-entrenched minority ruling groups. The concept of democracy, of rule by the people, died with Earth millennia ago.

The Grand Families are effectively hereditary monarchies, supported by some form of ruling class.

The vast empire of the Family Skamensis, for example, is controlled centrally by a sprawling bureaucracy backed up by a powerful military. The hierarchy of public servants and appointed officials govern all aspects of public affairs, with senior members of the hierarchy enjoying great prestige and privilege.

The other major Family in the story is the Family Firenzi. Their ruling structure consists of a looser arrangement of planetary governments which superficially have more local autonomy. Despotism is more subtle and benign in Firenzi space, but present nonetheless.

The Freeworlds enjoy independence from the Familys' rule, but that independence rarely extends to the general populace. Shayla's brother, Brandt, lived on the University Freeworld of Chevinta, which is ruled by an intellectual meritocracy. Brandt lived as a recluse, taking no part in the backstabbing world of University politics, and he would have rejected any suggestion of being a member of a ruling elite, but he hardly noticed the subservient underclass that kept him and his intellectual peers fed and clothed.

Then, there are the outworlds. Mostly ruled by brigands or feudal overlords.

The only ones truly free are too poor and remote to count.
Posted by Botanist at 10:38 PM 11 comments: