Continuing occasional posts about worldbuilding for my current WIP.

Aside from extreme weather patterns, the colonists in The Long Dark have another major problem to contend with. The planet is superficially Earth-like - similar gravity, similar temperature on average, abundant water and an oxygen/nitrogen atmosphere. All sounds moderately livable. Except for one thing. Both the air and the water are laced with a cocktail of poisons. Without treatment they are deadly.

OK. I decided the toxins would be large organic molecules and relatively easy to filter out, so there is no shortage of air and water per se, but they do need treatment.

That means you can’t go out onto the surface without a mask, and all living areas need to be enclosed and secured to keep the native atmosphere out.

This isn’t as extreme as living on, say, the Moon, where you have to pressurize living spaces against vacuum, but you do need a reasonably airtight barrier and airlocks everywhere. So, the colonists live in large domes, clustered together into towns and cities.

The dome arrangements of the town of Serendipity, where most of the action takes place. The large ovals are vehicle garages and warehouses. The smaller domes are habitats and workshops. The town is roughly a kilometer across. 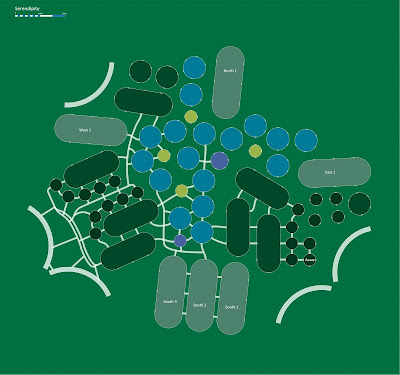 The relatively habitable equator is ringed by eighteen large cities. These are occupied year-round, and contain all the major industrial processing and hydroponic growing areas.

Away from the equator, in the twenty to thirty-five degree latitudes, there is a scattering of nearly fifty smaller towns in each hemisphere. These are only occupied during Elysium’s summer months. Half the planet’s population live here, harvesting medicinal products and other useful materials from the depths of the plant mass. At the turn of the seasons they have to migrate across the equator to escape the winter deep freeze - the “Long Dark” of the book’s title.

Map of Elysium showing up to forty degrees north and south. The equatorial cities and the northern towns are marked here.

When we moved to Canada we got a husky. We installed a new fence all around the back yard to make it husky-proof. In all the years we had Gypsy, and later Ellie, our Australian Shepherd, we never had a dog escape unless someone left one of the side gates open.

Sadly we lost Gypsy in 2016, but now we’ve added Mishka to the family, a five-month old husky who gets along fabulously with Ellie.

Tuesday afternoon: Panicked call at work from Megan, who’d dropped by home to pick up some groceries. Mishka is missing. Ellie is still there, and the gates are secured, but no Mishka.

Luckily, a neighbor whose property backs on to one of our next-door neighbor’s, called Ali to say she had Mishka. She has two huskies herself, in a fenced yard, and noticed she had mysteriously acquired a third. So, we were glad to have Mishka back but instead of one mystery, we now had two. How did she get out of our yard, and how did she get into our neighbor’s - both supposedly husky-proof?

Tuesday evening: Check the fence all around the back yard. No signs of digging. No loose fencing anywhere. No obvious way for her to get out.

Wednesday morning: Feed dogs as usual and let them loose in the back yard. A little while later, spot Mishka roaming the front lawn.

Conclusion: Somehow, she can escape. So likelihood is that she got out on her own yesterday. No need to assume some stranger had let her out for some reason. From there, our favorite theory is that she found her way through the neighbor’s property to the road behind, and someone found her wandering. It’s possible someone mistakenly though they knew where she lived and let her in with the other huskies.

Wednesday evening: Take Ellie out the front and pretend to go for a walk, leaving Mishka on the deck under covert observation, hoping she’ll repeat her feat and let us see how she escaped. No such luck. A lot of plaintive whining and wandering around on the carport roof, but no jailbreak.

Wait ... what? She’s not supposed to be able to get onto the carport. We have a deck over the garage, with the carport alongside. The roof comes up level with the railing that runs around the deck. Very early on, to stop Gypsy climbing up there, I installed fence panels along the edge of the roof nearest the deck. It stopped Gypsy, but not, apparently, Mishka. She happily squeezed around the end of the fence in the few inches between that and the edge of the roof.

That’s the far end of the fence in this picture. The carport is behind the fence to the left. 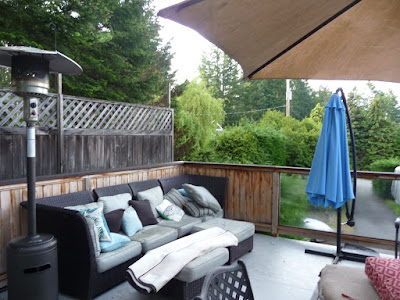 More worrying, she then decided to jump into the hedge jutting out and shielding the carport entrance. She floundered in the greenery ten feet above a very hard driveway. 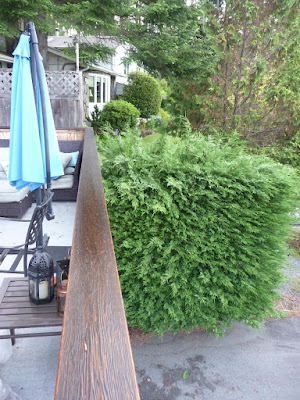 Luckily I was able to reach down from the deck and haul her out. She must have decided that was fun, because she repeated the performance later that evening and had to be rescued again. Not very comforting. What if she did that when we weren’t around?

Regardless, whenever we tried to tempt her to escape again, she went straight for the carport. Current theory is that she escaped previously by jumping down the far side, only a five or six foot drop into the neighbor’s yard because we’re on a hill. But clearly the carport has to be out of bounds.

Thursday morning: New lattice panel added to the deck to act as a deterrent. 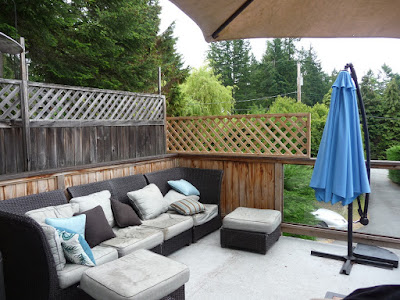 While I’m taking a breather from The Long Dark, waiting for the first part to get critiqued, I’ve turned my attention back to another small project that I aim to complete this summer.

A short e-book, Breaking the Block, looks systematically at a range of causes of writer’s block, and suggests possible remedies.

I’ve tried to pack the booklet with examples and practical tips, but the theme running through it is that writer’s block is not in itself an ailment, but simply the visible symptom of some deeper underlying cause.

It often seems to me that writers feel helpless when the words stop flowing, and they believe they have to wait for inspiration or for the right mood to strike. My belief is that the problem can be tackled more proactively, you just need some ideas on where to look for the source of the blockage before you can bring the right countermeasures to bear.

Even if you don’t find a specific tip in the booklet that helps you in your own situation, I think it helps to adopt the mindset that writer’s block is not some amorphous ailment of the writerly mind. Instead of feeling helpless, understand that somewhere there is a specific cause that can be overcome once you’ve shone a spotlight on it.

This is the fifth year they’ve run this innovative program, now being emulated in a number of other libraries, which showcases local authors and illustrators.

I joined about eighty authors making up this year’s collection for a launch party in the covered courtyard at the library. Our books, including The Ashes of Home, will be shelved prominently near the main library entrance, and they’ve put together a rolling slideshow for their display screens. 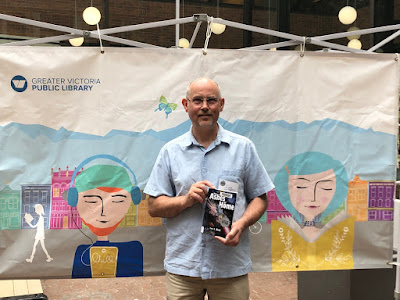 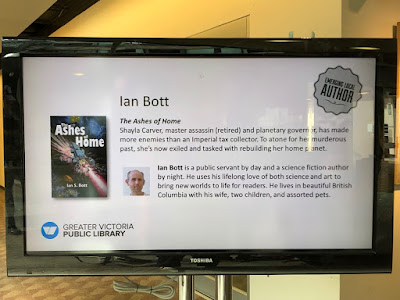 You can find out more about the collection at:
https://www.gvpl.ca/virtual-branch/emerging-local-authors/
Posted by Botanist at 8:33 AM 6 comments: