Continuing the opening from The Long Dark, on the way down to Elysium with her senior negotiating team, Jennifer receives an unwelcome message. The previous post ended with: “As you can see” - Jennifer fought to keep her voice steady and her tone matter-of-fact - “our mission has a new factor to take into account.”

Galloway’s expression couldn’t be said to be smug, he was too experienced for that, but it held a quiet anticipation. He’d known exactly what the letter would say. “The President places a lot of faith in you.”

Such precise wording. Outwardly a compliment, and nothing anyone would argue with. But ‘places’ rather than ‘has’? That single word gave the barest and utterly deniable hint that faith might be misplaced.

“So,” she said, “while we are busy renegotiating the Company’s agreement with this colony, you have a mission of your own. Chasing a new drug.”

“Confirming tantalizing reports of its existence.” Galloway’s eyes glittered. “And given the potential impact of this on the trade talks, this has to be of the utmost secrecy.”

“Withholding information like that from the negotiations ...” Jasmine Golightly, Jennifer’s legal expert, twisted her mouth. “The merest whiff of it beyond this circle, and we all spend the rest of our lives in jail.”

Thankfully, in between computer upgrades and a week camping, I've been able to resume work on cover art since I last posted a progress picture: 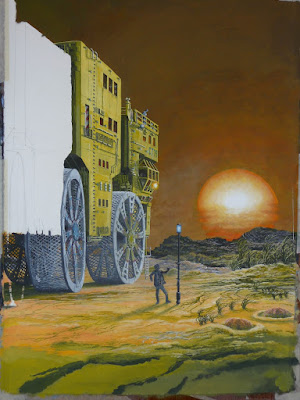 Although I'm not sure we can call it that this time!

With a significant birthday this month, the original plan had been to travel to the UK to be with family. That, of course, all got upended with COVID. And with the ongoing uncertainties around travel or pretty much anything, any plans to get away were decidedly last-minute.

As a result, we chose not to even think about getting the trailer ready for use this summer, but we still wanted to get up-island if possible. As it happens, our favorite campground has a row of cabins up by the river, so we rented one for the week.

I've always been curious to see what they were like. We've walked past them so often in years gone by, and this is the first time we've been into one. From the outside, they look small, and with hardly any windows I'd have expected the inside to be cramped and quite gloomy. 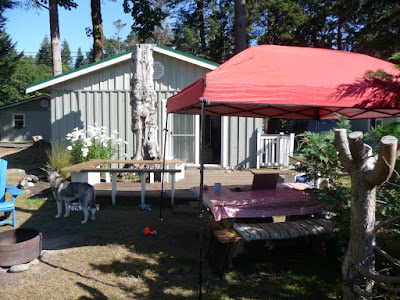 Totally wrong on both counts. I was impressed with the layout, the light and sense of space inside. 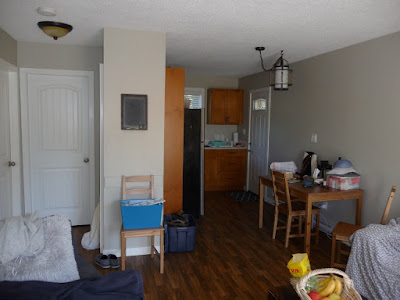 There's a generous living & dining area, a compact but adequate kitchen, and two bedrooms down one side to the left of the picture. Outside, there's a deck and secluded picnic area.

We had a good time away, mostly mooching around the campground and swimming in the river. Plus I started outlining and drafting a couple of tentative scenes for a new novel, which I hope to get into full swing once The Long Dark is published.

Email ThisBlogThis!Share to TwitterShare to FacebookShare to Pinterest
Labels: Life in general, Vacations

As I mentioned in my last post, I'm now working on a new laptop. My old MacBook was at least 10 years old, and was reaching the point where I wouldn't be able to keep up with software updates.

With a birthday coming up, and many previous years of not wanting anything in the way of gifts, it was an opportunity to splash out.

So I'm now getting to grips with the move.

I've generally found Mac upgrades to be fairly painless. Unlike Microsoft, which treats every Windows upgrade as an opportunity to show off how cool and geeky the Microsoft propellorheads are, and force millions of poor users in the real world to completely re-learn everything from the ground up, Apple doesn't mess much with the user interface. There may be new or updated features, but you can pretty much rely on finding things tomorrow in the same place they were yesterday.

The single most significant change this time was entirely self-inflicted – a switch from Microsoft Office to OpenOffice. This switch is a bit of a learning curve. In many ways, OpenOffice Writer and Calc look a lot like MS Word and Excel. Much of the look and feel is similar, but the overall sense of familiarity hides a wealth of smaller differences, which I'm still learning. Sometimes it takes a bit of online research to find out how to do things, but I have to say that – so far – I haven't found anything I used to do in MS Office that I can't do in OpenOffice.

And one huge sigh of relief – OpenOffice is blisteringly fast.

When I write a novel, I break out the manuscript into anywhere between 9 and 12 separate documents. These typically run to 10k or 15k words. I've always found that Word takes quite a while to open a document this size, and it's got worse over the years with various “improvements”. The most frustrating behavior that cropped up at the last big upgrade was that it would only seem to load the first few pages and then stop until I tried to scroll down, then it would realize there was more to follow and load some more. I would drag the scroll bar down only to find I was only a few pages in, and the scroll bar would jerk and shrink as more got tagged on to the end. For documents the size I deal in, I had to force the scroll bar all the way down again and again until I was sure I had the full text. This could take a minute or so on a really large document, like when I pack the whole manuscript into one file for publication.

Imagine my surprise, then, when I went into OpenOffice and opened the full text of The Long Dark – over 100k words, 200 pages. It was all there in under 2 seconds. No messing around.

So, I'm now up and running, and learning as I go. It took many long hours last week to copy files over, especially my locally-stored mailboxes because the export/import feature didn't work as advertised. The one thing I still haven't yet solved is how to move my photos library. I've tried several approaches which should in theory have worked, but none of them so far have managed to copy that single 18GB file. So, that is still a work in progress.

P.S. Just discovered another benefit – I can copy/paste from my document straight into Blogger's text window without accidentally including a load of MS Word hidden crap, and it carried over italics as well!
Posted by Botanist at 8:08 PM 7 comments:

Continuing the opening from The Long Dark, Jennifer receives an unwelcome message.

An exchange of puzzled glances between the other negotiators told Jennifer they at least had no knowledge of Galloway’s message. The craft creaked and juddered in sudden turbulence, mirroring Jennifer’s own turmoil. There were always hidden agendas at work, anywhere the Company’s tentacles reached. That was a given. But Jennifer was used to being the architect, not the clay. How had Galloway slipped this past her?

As per its instructions, she passed the letter, already starting to degrade on contact with air, around the cabin. This handful of senior officials needed to know the score, to know how to steer the complex legal and financial discussions they were about to embark on.

“As you can see” - Jennifer fought to keep her voice steady and her tone matter-of-fact - “our mission has a new factor to take into account.”

No real progress with cover art this week. It’s been another intense week at work, plus most of my energy has gone into setting up a new laptop, an early birthday present. My old MacBook was at least 10 years old so it was time for an upgrade. I've still got a few things to sort out, but for the most part I'm up & running.