What happened to humanity?

I was planning on lining up more posts on worldbuilding, but the last week has left me feeling like normal rational life has taken its leave of this continent.

We have a spate of bombs through the mail, and then Pittsburgh - to add to all the other mass shootings this year. But what is most sickening is that, rather than genuine calls for strength and unity and compassion, the loudest voices on both sides of the divide are racing each other to the bottom of the sewer dredging the depths for any political capital they can gain.

I think I’m going to unplug from the Internet until after November 6, because right now a large slice of humanity has lost its humanity.

BTW - comments are off, 'nuff said

Email ThisBlogThis!Share to TwitterShare to FacebookShare to Pinterest
Labels: Life. Don't talk to me about life, Rants

A peculiar world is likely to support some peculiar life. What I’ve settled on is by no means original, but I’m trying to develop the basic idea into something unique to this story.

I’m entering new worldbuilding territory here, because up until now I’ve not dealt with any form of alien life. Even in Shayla’s world, they never encountered another inhabited planet. Everything there has its origins on Earth (even though they’ve long ago forgotten that Earth even existed.)

In The Long Dark, the planet Elysium is girdled by a single plant-like superorganism. The locals call it Sponge.

Like Earthly life, Sponge is based on carbon chemistry, with water as the medium, and an oxygen/nitrogen atmosphere. During the summer season, Sponge photosynthesizes for energy.

But similarities end there. Sponge is not based on cellular structures like our plants and animals, and it has no DNA. I don’t get into these kinds of details in the story, but my basis is that there are other mechanisms possible for self-organization and replication.

Something I am fleshing out, though, is some insight into the inner structure of Sponge as that is important to the story. The plant mass forms a carpet hundreds of meters thick - kilometers in places - that covers the equatorial to mid latitudes, ending about 40 degrees north and south. Given the extreme conditions at the poles, I figured this was a reasonable extent for life to persist.


Map of Elysium, showing the active growth zones north and south,
and the main north-south systems of veins

The name “Sponge” conjures images of a fairly amorphous uniform spongy mass. In the story I try to dispel that with images of specific and detailed structure at all kinds of scales from the microscopic to the gargantuan. There are vast structural ribs holding the plant’s shape, and complex networks of veins, aquifers, and chambers to convey liquid, nutrients, and air to where it’s needed. The mass is riddled with chambers, deep chasms, and vast hollows that would easily swallow a town, along with a variety of specialized structures that make up the living portions of the plant. It is these depths that the colonists harvest for a living.

Some bizarre and contradictory scenes played out in the media last week.

We have Taylor Swift posting a political message to Instagram - something she rarely does:
https://www.instagram.com/p/BopoXpYnCes/?hl=en&taken-by=taylorswift

And then we have Kanye West in the Oval Office - transcript here:
https://www.cnn.com/2018/10/11/politics/kanye-west-oval-office/index.html

When Taylor Swift posted her thoughts on Instagram, an angry hornet swarm of indignation buzzed into being.
“Why should the world care what a singer thinks?”
“What does she know about politics?”
“What gives her the right to voice an opinion?”
The implication is - you have no right to post this, shut up!

Let’s step past the obvious absurdity of these comments in the first place. Instagram is a social media site, along with many others. Millions of people post their thoughts to these sites every day. Who cares what you ate for breakfast? Nobody? Fair enough, but nobody castigates you for posting it. If you don’t care, shrug shoulders and move on.

The subtext seems to be, becoming a successful musician somehow cancels your right to a voice like the rest of the population.

The double standard comes into play with the sub-subtext - you’re not allowed to post something I disagree with. That same furious horde was strangely silent when Kanye West monologued in praise of Donald Trump.
Who’s he? A rapper.
Political qualifications? Zilch.
Equivalent condemnation on publicly voicing an opinion just because he’s an entertainment celebrity?
*Crickets*

Then we come to the content of their respective messages

Kanye West expressed outright and unequivocal support for Donald Trump. The message was exclusively partisan. That is his right.

In comparison, Taylor Swift did express her values and who she would be supporting in her state in the mid-terms, and she articulated her reasons clearly and succinctly. That is her right.

But beyond that, she didn’t exhort her followers to support Democrat candidates or to share her political beliefs. This was simply the lead-in to the real thrust of her post, which was an entirely non-partisan exhortation to educate yourself and vote accordingly. And, importantly, to make sure you actually do register and vote.

Why that message should attract such vitriolic condemnation escapes me.

Email ThisBlogThis!Share to TwitterShare to FacebookShare to Pinterest
Labels: Rants

I’ve talked about the peculiar day/night cycle on a world with a 90 degree axial tilt. That much is straightforward observation of how the sun would look at various points on the planet’s surface. But the next part of worldbuilding is a lot more speculative.

Most of a planet’s weather is driven by convection currents caused by temperature differences in its atmosphere and oceans. With that in mind, think about a planet where the sun hovers directly overhead at the pole, baking it remorselessly for months, then disappears for a whole half of the year plunging that same pole into darkness. To me, that adds up to massive temperature fluctuations across the globe during the course of a year.

I know the same thing happens on Earth at the poles, with six months day and six of night, but the sun stays low in the sky and the days stay cold. The poles don’t turn into the tropics at midsummer, and most of the Earth’s surface sees a reasonable day/night cycle all year round. On this planet, by contrast, periods of light and darkness are taken to extremes across most of its surface, and everywhere gets a dose of tropical heat at some point in the year.

One thing I think we can safely assume - there will be some pretty violent weather going on. Beyond that, I certainly have no way of knowing how it would look, so the rest is pure invention.

Earth has many stable circulation patterns, but its axis only wobbles 23 degrees back and forth relative to the sun during the course of a year. My world does a complete 180 and then back again, so any circulation patterns would completely reverse, which suggests a lot of turbulence to cope with.

In this world, a ‘year’ lasts about thirteen Earth years, so that gives a lengthy season. My worldbuilding has global weather patterns switching through a series of states as the seasons change. Each state is reasonably stable - though not necessarily benign - for a long stretch of time as the planet slowly turns new latitudes to the sun, then the pattern becomes unstable and flips in a rapid and violent transition to the next season.

The height of summer is the calmest time, and this is when most of the outdoor work is done. Meanwhile, in the winter hemisphere, temperatures bottom out at minus two hundred Celcius, lashing the winter pole with storms of nitrogen rain.

The most violent conditions arrive some time after midsummer, as the winter pole starts thawing and the summer pole plunges into darkness. Through the mid-seasons, convection currents in the atmosphere undergo dramatic shifts powered from the poles. I’m expecting storms and winds that would put an Earthly hurricane to shame. 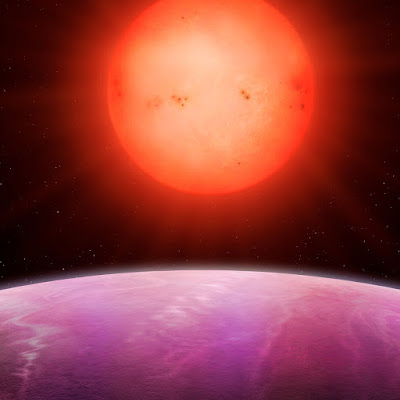 On top of this, a red giant star itself is pretty active compared to our tranquil sun. Outbursts of solar flares make nearby space inhospitable to orbiting craft much of the time, and the colonists long ago gave up trying to keep satellites working. I’ve given the planet a powerful magnetic field to shield the surface from the worst of the solar storms, but it’s still a dangerous place to be. And all this electrical activity makes communications tricky at best. The colonists rely on land lines laid between permanent settlements, and short wave radio when conditions allow.
Posted by Botanist at 2:57 PM 7 comments: