With everyone in the family in full time work or education, time in the evenings and weekends is at a premium and a little planning goes a long way.

We always plan a weekly menu, and get all the necessary groceries in one go for the week ahead. Sometimes the hardest part is simply coming up with a menu plan and trying to keep it interesting. We love a variety of foods and flavors and are ready to try new things from time to time, but under pressure of time it's only natural that most of our meals are tried and trusted family favorites.

Even so, we try to mix it up and we often find ourselves wracking our brains, thinking "We need a rice dish here" or "Haven't had fish for a while", and trying to recall dishes to tempt the tastebuds.

Just as an experiment, I've started another blog called Rumble in the tumble where I'm keeping a daily record of recipes as we go. My thinking was to keep a note of meals, using the labels to index by main ingredients to help jog tired memories. We'll see how that goes, but meanwhile if anything over there encourages you to try something new it will have been worthwhile.

Just a word of warning - don't expect full-blown recipes with measurements and precise instructions, or anything fancy like that. I mostly just dive in saying "fry this" and "boil that". Quantities are up for grabs, and depend how many you're cooking for. This is seat-of-the-pants cookery.

On the plus side, it's all very simple and forgiving stuff. We like simple :)
Posted by Botanist at 10:08 PM 5 comments:

Email ThisBlogThis!Share to TwitterShare to FacebookShare to Pinterest
Labels: Life in general, Recipes

I know I’ve posted before about how life seems to go through up and down swings. The last couple of months have felt like unusually hard work, with very intense spells at work, illnesses, and (something I didn’t mention) we had one of our cats put down a week ago.

So it was great to have that party last weekend that Megan had spent so long preparing for before her appendix operation.

During the week, Ali and Megan had been visiting a pet shop for supplies for the aquarium and came back with two kittens. Meet Loki and Luna: 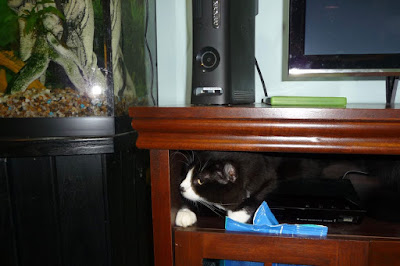 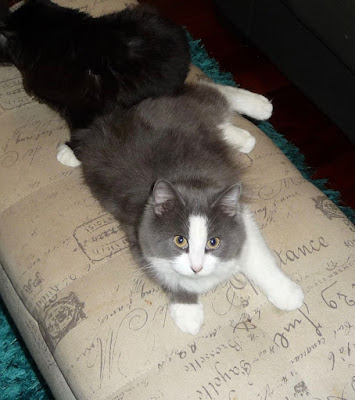 Last night I gave a talk at the library on Writer’s Block, something I’ve been preparing for weeks now. I’ve been running through my presentation in my head for ages, so when it was done it felt like a huge weight off my mind.

And to round off the good things in the past week, Megan today spoke with a teacher at Vancouver Island University and learned that she’s been accepted to join the baking program there in September. This is fantastic news because she’s been enjoying the culinary program at school this semester and has finally found something she wants to do. But of course there’s been a lot of pressure through the application process, and she had to recover enough from her recent operation to sit an assessment this week.
Posted by Botanist at 8:41 PM 7 comments:

There is one aspect of our March traumas that I didn’t talk about last time. I decided to save that for a separate post and hopefully be able to report “mission accomplished.”

When Megan complained of abdominal pains, one of the reasons we assumed an innocuous cause at first was that she had been working very hard over the previous days.

She had taken it on herself to organize a surprise birthday party for one of her friends. We’d discussed the practicalities, and had reservations about the prospect of a dozen or more teens bouncing around the living room upstairs, so we settled on clearing out the garage for the party.

First off, there was a heap of stuff accumulated all over the floor - after all, who keeps their car in the garage? That took a day of sorting out with all of us pitching in to help.

Then she went to town cleaning up the rest. For the next several evenings we sat upstairs trying not to cringe at the sound of hammering from downstairs. Megan blacked out the windows, covered up the shelving, moved our summertime patio furniture in from its winter resting place in our bedroom, and put up strings of lights. 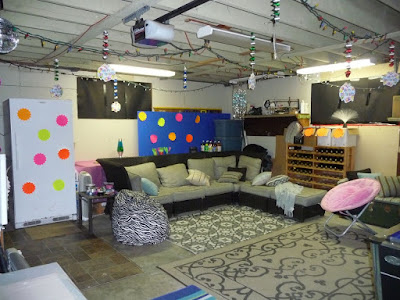 There was a major shopping expedition for food and drinks. We borrowed an air hockey table, which was a heavy duty mission in itself to lift in and out of the truck.

All in all, she put in a shedload of hard work over the course of four days. Monday she was planning to bake a cake ready for the party on Tuesday.

Monday and Tuesday were spent at the hospital instead.

The party, of course, had to be postponed. But I’m happy to report it finally took place today and was greatly enjoyed by all involved.
Posted by Botanist at 6:17 PM 4 comments:

Now that April is here, life seems to have calmed down a bit.

Which is just as well.

When I last posted, I was looking forward to a bit of normality after an exceptionally intense few weeks at work. Better still, I booked a couple of days’ vacation in the middle of Spring Break to enjoy a long weekend of relaxation.

Things were going to plan until Sunday night, when Megan woke us in the middle of the night complaining of stomach pains. We went through the usual “what did you eat/what have you been doing” rigmarole for a couple of hours, but eventually concluded this wasn’t something simple that would sort itself out with a bit of rest.

Off to Emergency, and after a stressful day of tests she was in that night to have her appendix out. She was released from hospital the next day, and in the post-stress relief I promptly went down with a cold that knocked me out all through part of the week and all through the following weekend  :(

Back to work this week and things are more on an even keel. I’m feeling better and Megan is doing well.

Meanwhile, my novel is cranking slowly through the critiquing process which means I’m able to slow down on the writing front for a bit. Right now, instead I’m getting ready to give another talk at my local library. I’ve done talks like this a couple of times in the past. It takes a lot of preparation but it’s always been a worthwhile and enjoyable experience. This time I’m talking on Writer’s Block, based around a short series of blog posts I wrote this time last year.