My goal this year is to publish The Ashes of Home before the end of the year, hopefully in November.

There’s a lot of work still to do before then. I’ve got a group of critiquers looking at the novel in depth, but this is a long process. I don’t expect they’ll be done before the end of August, which leaves little time for final edits and multiple read-throughs.

Then I need to get the whole thing in the hands of the book designer, which from past experience will take a few weeks of back and forth before getting back the final product.

All this stacks up in terms of timelines, many pieces of which are outside my control. But I think it’s still do-able.

One thing I’m doing differently this time around is getting a head start on the cover art. Previously I went to the book designer with only rough drafts to discuss, which meant a month or two elapsed time slotted into the process while I produced the final artwork. This time I am being a bit bolder and settling on the artwork ahead of time.

I posted some drafts back in January, and the overwhelming consensus was for design #2, so that is what I’m going with. While the critiquing process is ticking quietly along, the artwork is starting to take shape. 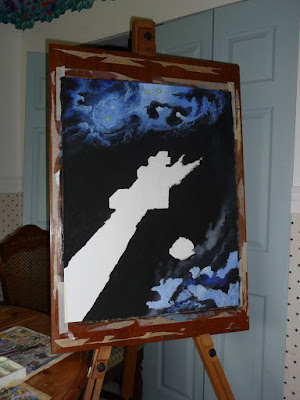 I recently posted pics of our refurbished deck - a big upheaval this Spring that we are glad to have completed. Trouble is, we still weren’t properly able to take advantage of it during the week or so of fine weather at the end of last month.

We had an 8-seater table with a tiled top. Very nice to look at - when it was new - but over the years many of the tiles had cracked and were lifting. We checked reviews after the fact and found this to be a common problem with this design. 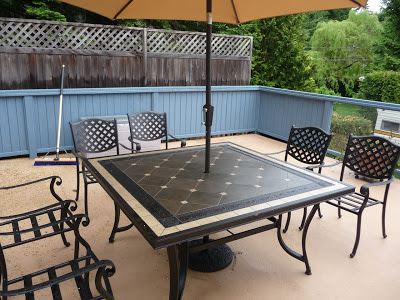 We were already thinking of renewing the top at some point. It was also very heavy, and we decided there was no way we were lifting it down off the deck and back up again. So this was clearly the time to strip off the tiles, making it light enough to move while they worked on the deck, with the intention of re-tiling afterwards.

Part 1 of the plan didn’t yield the result we expected. Instead of leaving a nice base underneath, the base (some sort of resin reinforced with wire mesh) was also cracked and came away with the tiles.

We were left with nothing more than a bare metal frame. Easy to move out of the way. Not so good for eating off.

After much agonizing over possibilities and cooking up alternative plans, I eventually came up with a design and spent last weekend busy with saw, plane, and wood screws. 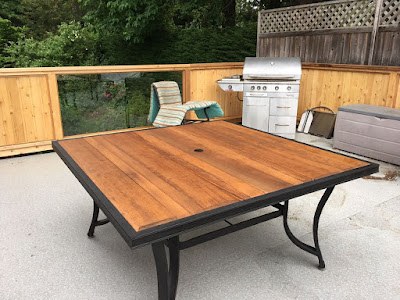 Our outdoor living space is now officially back in action!
Posted by Botanist at 5:47 PM 6 comments: