I’m still keeping this main blog going for general life and writing topics as & when the mood takes me, but I’m finding it beneficial to separate out some things into their own more focused blogs rather than mix everything in here.

I already mentioned my recipe blog, Rumble in the Tumble. After daily postings in April, this one is slowing down because we revisit favorite recipes every few weeks and I’m only posting here when we do something I’ve not already described.

Just for fun, I’ve recently been playing with another concept entirely. It’s called Land of the Rising Dumb, and takes a gentle poke at a certain administration, ‘cos - hey - you’ve really just gotta have a laugh sometimes.

All decked out for summer

Last summer we realized that we would soon need to do something with our deck. Spanning the garage and wrapping around the living room and kitchen to the front and rear, the deck is a vital part of our living space for at least half the year.

Trouble is, the railing was starting to sag alarmingly to the point where I wouldn’t have wanted to put any weight on it, and there were a few places where there was a noticeable bounce under foot. Not good.

So we resolved to put things to rights this Spring before the fine weather kicked in. A builder friend managed to squeeze us in between jobs - and in between spells of rain that dragged the process out a lot longer than it might have taken, but we’re there now and very pleased with the results.

The most nerve-wracking part of the operation was having the garage open to the weather while they ripped off the old decking and put down new plywood. We had to clear the place out beforehand and do our best to shield the freezer and shelves the that remained. Here’s how they left it that first evening. Luckily the next 24 hours stayed dry and the garage was covered again by the time the next showers hit. 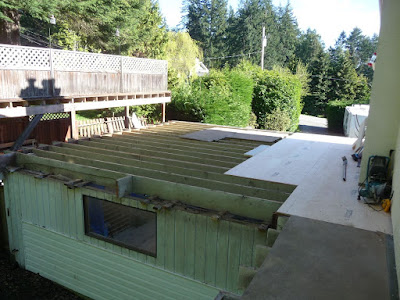 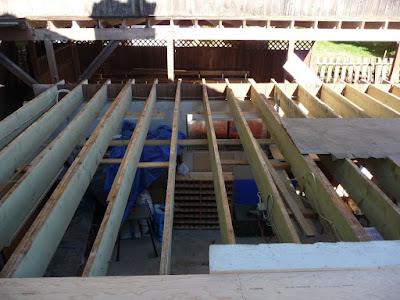 And here is the finished work. We’d debated going for aluminum railings (zero maintenance) but opted for cedar in the end, and we are both happy with that decision. They were able to salvage the glass panels that were in place originally and put everything back very much like it was. 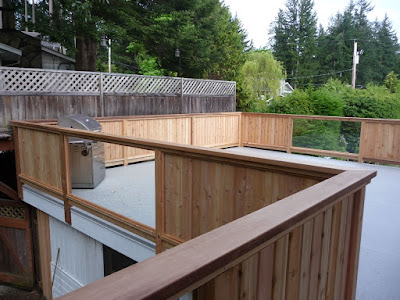 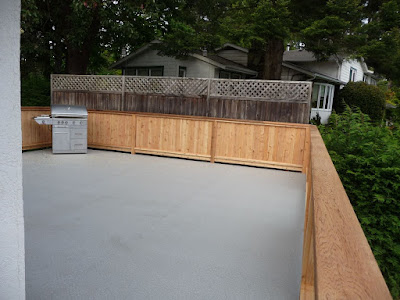 Yes, that’s our barbecue sitting lonely in the corner. I had to take off one side shelf to maneuver it through the door and into the kitchen while they worked. There was no way we were going to get it down the stairs, remembering the battle we had years ago getting it up there in the first place.
Posted by Botanist at 8:28 PM 4 comments:

Email ThisBlogThis!Share to TwitterShare to FacebookShare to Pinterest
Labels: Life in general, Projects

Now into its third year, the Greater Victoria Public Library is again celebrating emerging local authors with a special collection.

On Thursday evening I attended the launch of this year’s collection, showcasing over 100 local authors who are recently published, either independently or through a small press.

The library courtyard was crowded with authors and guests. It’s only when you see people and books assembled like this that you realize what a thriving occupation writing is.

Yes, Tiamat’s Nest is one of the books in this year’s collection. See here for more details about the GVPL Emerging Local Authors program. 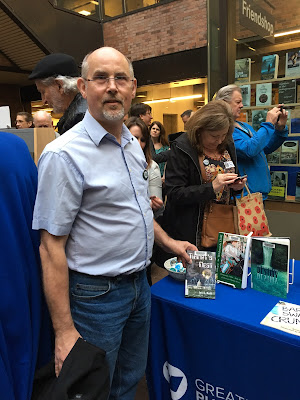 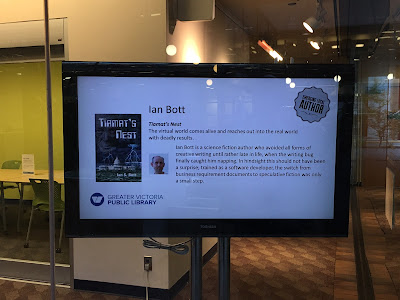