Building a battleship - look and feel

In both Ghosts of Innocence and The Ashes of Home, Shayla spends quite some time on board warships of one sort or another.

When writing scenes, I find it important to have a firm idea of the look and feel of the setting, the kind of atmosphere I am trying to evoke. For warships, I have always avoided the clean, shiny ultra-modern feel of Star Trek or Star Wars interiors. One possible exception is the vast Imperial Sword-class which are big enough to hide messy machinery out of the way. Apart from that, though, there are few sops to creature comforts.

Everywhere is certainly clean in the sense of not dirty - navy standards are strict - but definitely not clean in the sense of uncluttered. Everywhere, there are hard surfaces, painted metal, and pipes and machinery are exposed. Living and working spaces are cramped. Function comes first. The needs of people have to fit in and around the workings of the ship.

This is particularly true of the Admiral George Leonard. This ship is five thousand years old. Although well-maintained, it is ancient and I wanted to convey some of that sense of antiquity and solidity.

My main influences were twentieth century large warships. These have always held a fascination for me anyway, so it’s only natural that I should want to recreate some of this atmosphere in my writing. Hey! I’m the author! I get to decide things like that :)

So a typical corridor is likely to look more like this ... 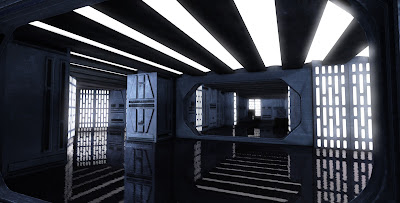 She headed aft, to where she knew another near-vertical highway connected the ship’s decks. Shiny gray walls reflected yellow-white light. Battleship gray. In her time in the navy nobody had ever been able to explain why this particular shade of gray should be associated with battleships. Tradition, they said, as if that explained everything.

She ducked through an open blast door into another corridor. Pale green decking gave way to dark blue. Refreshed by her brief rest, she bolted up the last three flights to ‘A’ deck.

Crew sleeping accommodation is similar to this ... 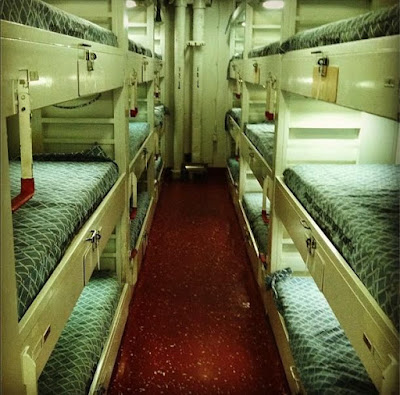 Down a couple more decks, the cramped warren of the crew’s mess was a marked contrast to the hubbub upstairs. In between ranks of kit lockers, mess tables lay mostly vacant. A few off-duty crew members lounged, read, played cards. Shayla avoided these oases of light, tuned to the artificial day/night cycle, and scurried through the permanent twilight of the dormitory areas. Past rows of curtained sleeping racks, she counted until she found the rack she’d assigned herself, the lowest of three. Low level racks, inches off the deck, were least favored but also least likely to attract notice. She crawled silently in and drew the curtain.

This could easily be a corner of the kitchens where Shayla works undercover ... 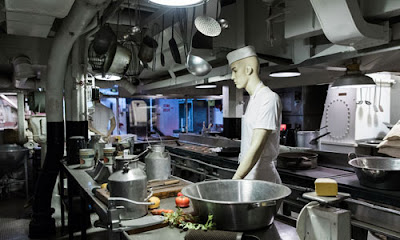 And this could definitely be a model for the officers’ wardroom where she overhears useful information ... 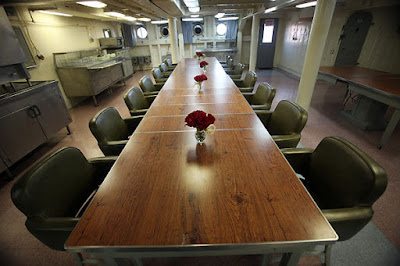 And finally, there’s the place that Shayla always seems to end up in. The brig ... 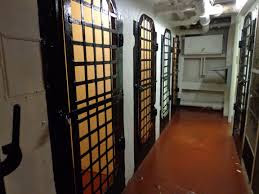 She woke, head pounding, on a hard metal bench and thought for a moment that she was still on Eloon. Her surroundings came back into focus: white-painted metal walls, a steel toilet and basin in one corner, a sliding metal grille for a door. The door and floor were painted a fetching blood red. The heavy omnipresent thrum of the warship enveloped her. The air was warm and dry, but pricked with a whiff of disinfectant.

I've been aboard many an old battleship and yes, it could easily be the inside of a space ship.

Alex, that's cool. The closest I've been is the cruiser HMS Belfast, moored in London. I'd love to visit one of the American ships one of these days.

Hi Ian .. I have to be back to read. Looks like I will be around for a while ... but I'll be back to comment over the weekend - cheers Hilary

It's very cool that you have such strong images in your mind of what your spaceships look like. Makes it a lot easier for you to make them realistic to your readers.

With your love of old battleships, I hope you get to tour one someday. We absolutely loved going through the U.S.S. Alabama. It's hard to appreciate how huge one of those warships is until you drag your weary bones up and down all of those steps and visit all the nooks and crannies.

Hilary, does that mean you've sorted out your visa arrangements? That's good news if so.

Susan, it does make writing a lot easier.