Continuing my tour of the large and ancient battleship, Admiral George Leonard.

Most of the ship’s crew of roughly 6,000 bunk down in the three main mess decks occupying the forward lower section of the ship. Here is the plan of the “G” deck mess where Shayla stows away. 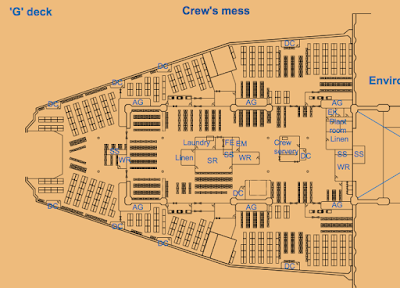 Most of it is given over to rows of bunks and lockers, a cramped labyrinth with occasional more open spaces for mess tables. The bunks are in sets of three, much like this shot from a real battleship. 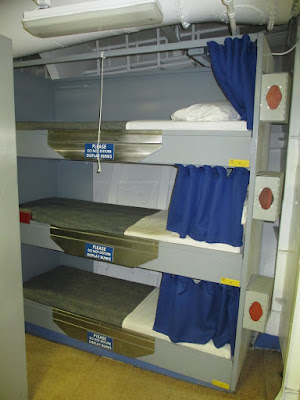 Knowing your way around a maze like this helps in an emergency, like when Shayla realizes she’s being ambushed ...
As she diverted away from her bunk and towards the locker area, the undercover agent once more, hairs on her neck prickled. In her fatigued state, focused on her bunk and sleep, she’d missed small signals that should have put her on high alert. It was near the end of the night watch, the mess areas were normally quiet but there was always someone, a few small knots of people, eating, playing cards, gossiping in low murmurs. The mess tables around here were suspiciously empty. Instead, a few unfamiliar figures lurked at corners between bulkheads and lockers, feigning innocence. The stake out was obvious. Casual onlookers had been warned away. Casting back through her memory, Shayla pictured who was stationed where as she’d entered the labyrinth of the mess deck. In her mind’s eye she mapped the outline of the quarantined area, aware of a slow drift of people closing in behind her. The epicenter lay ahead, where her locker was.

Each of these decks includes shower and washroom facilities, laundry drop-off and pickup points, and a servery linked to the kitchens a couple of decks above by a hoist. While many crew members might choose to eat down in the mess decks, they also have access to a large canteen, open all hours, in the middle of the main recreation area. 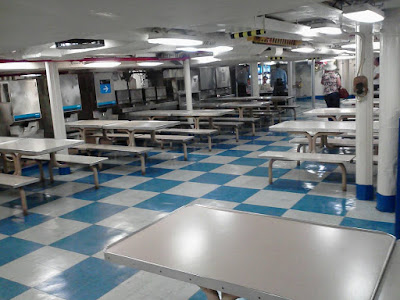 As well as the main crew messes, there are at least another two dozen smaller mess areas for the roughly 1,000 officers and petty officers. To help plan these out, I researched navy ranks to get an idea of a realistic proportion of different ranks in a ship’s population.

A ship like this might be away from civilization for months at a time. It’s not enough to provide basic eating and sleeping accommodation, the ship is a fair-sized self-contained town with essential amenities to keep everyone mentally and physically healthy. The recreation deck includes a coffee shop, library and study rooms, and a chapel. The deck above houses a comprehensive suite of fitness facilities including a running track circling the core of the deck. Along in the next section, there are stores for civilian items, and tailor, cobbler, and barber shops.

You must've done a stellar job describing the ship's interior, because I imagined it just as it's shown in the photos. Good job!

I had recreation opportunities on my ship as well. Plus I added a hydroponics bay they had access to.

Susan, no worries, I knew England were doomed the moment Croatia equalized. They have a long history of collapsing when the heat is on.

Alex, recreation is vital, and hydroponics is a cool idea if your ship needs to be more self-sustaining over long periods.

Hi Ian ... great post and as the others have said you've certainly done your research.

By chance have you seen the Boaty McBoaty science vessel 'The David Attenborough' which is being kitted out now ... before launching at the end of the year ... could give you a few ideas ... I didn't hear them mention chapel - but I'm sure there'd be an equivalent ...

6,000 is a lot of people ... well done - so interesting to read up ...and then of course we have Shayla and she needs to get out of her situation - cheers Hilary

Interesting :-) When my husband was in the US Navy, late 60s to early 70s, he spent time on aircraft carriers. He was a machinist's mate. When there were flight ops and the "airdales" were aboard, he said it turned into a floating city with several thousand people on board. The aircraft carriers today are bigger. His ship is now a museum docked at NYC. :-)

Hilary, I have not seen that vessel, but I did follow the naming competition with some interest. I think Boaty McBoaty is a wonderful name :)

Teresa, I have taken a lot of inspiration from those large post-WW2 carriers.