This will be my last post about the process of designing the Firenzi battleship, Admiral George Leonard, which Shayla infiltrates in The Ashes of Home.

Previous posts talked about the general design, the arrangement of weaponry, machinery spaces, and crew accommodation, as well as some of the practicalities of such a large drawing project. We wrap up with a quick look at how a ship like this is run.

As with any large ship, the analogy of a good-sized town joins forces with that of a fair-sized corporation. And organizations of any size do love their bureaucracy. And Shayla is ready to exploit any loophole that such cumbersome machinery inevitably reveals, after some preparation to seed minds and systems with her newly adopted identity ...

She reached the ship’s administration office and paused a moment to bring her mind back to the task in hand, and to the persona she’d adopted. She asked for the admin clerk the CPO recommended.
Petty Officer Isobel Mullin spun her tale of woe.
The clerk looked up her record, asked questions. Shayla had answers to match the records. Those records also confirmed that tales of woe followed Petty Officer Isobel Mullin everywhere.
He shook his head and helped Shayla access her account. Rolled his eyes when she promptly managed to lock herself out of the system again, though buggered if he knew how she’d managed that under his watchful eye. The system really did hate her. They started again, this time with idiot-proof instructions to keep her account safe.
Petty Officer Isobel Mullin blessed him with a smile to light the darkest night, and Shayla left with a spring in her step that needed no feigning. She’d just completed a paper trail of authenticity that she couldn’t achieve with any of her fictitious identities. She’d created personnel records, training records, disciplinary records, transfer papers, all the administrative details within reach of a payroll clerk, but it took someone with specialized security clearance to activate her system account. She was now officially legit.

The administration office is part of a sprawling suite that includes stores and supply, procurement, finance, payroll, HR, as well as a mail room and the ship’s own internal news room.

The deck below that, right in the heart of the ship, is the command center, or bridge. 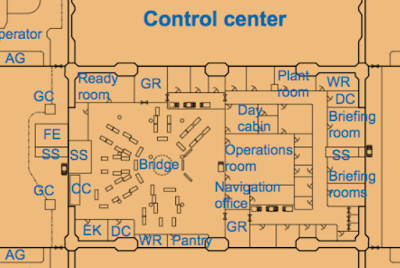 I’ve never understood why sci-fi depictions of spaceships so often place their bridges in the most exposed positions imaginable. On a sea-going warship it makes sense to give the captain and command crew as good a view of their surroundings as possible, but in a space battle I expect speeds and distances to be too great for that to make any sense. Plus, you are working in three dimensions, so no matter where you place yourself the ship itself will obscure at least half your field of view. So in my world, all command decisions are fed into tactical displays fed from arrays of sensors covering the whole sphere. It follows that the last thing they need is access to windows, so the command center is placed in the most protected location possible.

The command center of Shayla’s old Martha Sandover had been strictly off limits to lowly grunts like her. A shiver of excitement ran up her spine as she crossed the threshold into this holy of holies.
The noise struck her first, or rather the lack of it. She remembered her first experience of an Imperial capital ship’s command deck and the cacophony of sound that pervaded the space. Here, the air was heavy with a hundred murmured conversations that seemed muted and distant in comparison.
The captain stood, feet apart and hands clasped in the small of his back, behind a ten-foot-wide tactical display set into a central well in the floor. His white uniform jacket seemed to glow in the twilight world, lit by rank on rank of screens. In front and around him control stations radiated away into multi-hued corridors. A quick survey of insignia confirmed Shayla’s assumption that the most senior officers manned the inner circle of stations, with their underlings seated in decreasing order of rank towards the outer reaches of the wide, low-ceilinged room.

The end result looks nothing like a ship’s bridge, but should closely resemble a modern warship’s Combat Information Center. 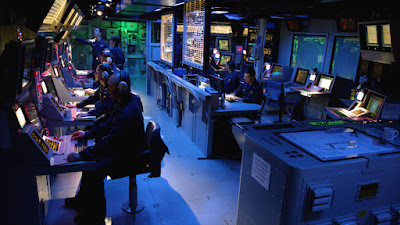 If you want to see more, remember that the full completed plans are posted to my website here.