Building a battleship - filling in the details

Continuing my posts about drawing up plans for the ancient battleship, Admiral George Leonard.

Once I had the main structure in place and identified the broad layout, it was time to fill in the details. This is what took most of the time on this project.

There was one aspect of the design that helped here - not planned, it’s just the way it worked out. The deck areas were sharply divided up into distinct zones by the keels and structural frame. This suggested that it would make sense to designate zones to specific purposes, and focus my efforts on one zone at a time.

Here, for example, are close-ups of the main medical center and ship’s administration offices. 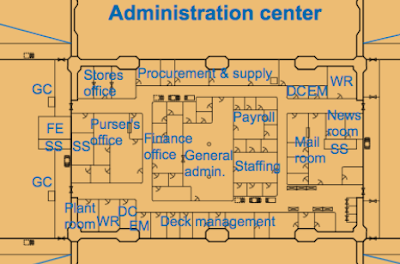 Once I got going, I quickly realized something that I hadn’t fully thought through yet. Faced with all those empty boxes, repeated deck after deck, I had a lot of space to fill! In the book, despite the overall enormous size of the ship, I do my best to give the impression of cramped and crowded living and working conditions. But in practice I seemed to be faced with a positively embarrassing surfeit of real estate.

Of course, there’s also a lot of stuff needing to go into that space, but I had to start getting pretty inventive thinking through all the possibilities that might be required in a fighting ship with a crew of six thousand, isolated from planets and bases for months at a time. I had to be fairly generous in my use of space, without making it look too generous. So I carved the deck up into lots of small compartments, and assigned functions to them as creatively as possible while making it sound and look credible.

One of the upsides of taking on a large project over a long period of time, new thoughts would pop into my head from time to time. I can tell you, I was always happy when a new idea cropped up, and I thought ... yes, that is going to need a lot of room! And it was a big relief when I neared the end and found I was now having to look for odd corners to squeeze things in.

BTW - the full set of completed plans are posted to my website here.

That's where exploring a real battleship comes in handy - you can see all the unique spaces you might not have thought of.
Plus storage and mechanics take up a big chunk as well.
Looks like you had the medical centered well covered.

I think it's very cool that you were so methodical about configuring the design of your ship. It's your attention to details that makes your story so believable.

Alex, I don't have a real battleship nearby, but I have studied ship plans endlessly over the years. There's a brilliant series of books called "The Anatomy of the Ship", plus deck plans online and loads of photos. Storage and machinery do indeed account for most of the ship, but even so there's a lot left to fill in.

Susan, glad you think so :)

Hi Ian - that's a mammoth task ... but great to see that you've been so thorough in your thought purposes. I guess if one is practical - it's fairly simple to fill in the gaps - as we've experienced life in homes, on tiny boats, camped, had hospital experiences, administration offices, personnel areas et al ...

But then you have one wonderful lot of ideas, places and details to pull together ... I'd like to look at your plans sometime ... and will do. Fascinating to read your process though - cheers Hilary

Hilary, I do indeed draw on all those experiences to flesh out the details.